For the last month, I have been pondering the idea of making 18th century pockets. It was my idea to wear them to an 18th century ball and use them  as a place to store my modern items (cell phone, credit card, cash, car keys, etc.). I was thinking of making simple linen ones, without embroidery, but once I started researching them I realized that I really wanted to go the full distance. In this case, the full distance meant hand sewn silk embroidery… The realization hit me just a few days before the ball that this plan was flawed. There was no way I was going to complete hand embroidered pockets in the time I had left. My choices: to fudge it and be stressed out while trying to complete hand embroidery with cotton thread or to wait, source my products and make a plan, and enjoy my time hand embroidering. What to do? Well, I decided to do the latter and I am glad to say that I am thankful to have used common sense and avoided stress! For now, the plan to make pockets has been added to my list of things to make in my leisure sewing time (when other, more time sensitive projects are lacking… Does that ever happen???). These charming pink, green, and blue ones are my goal. 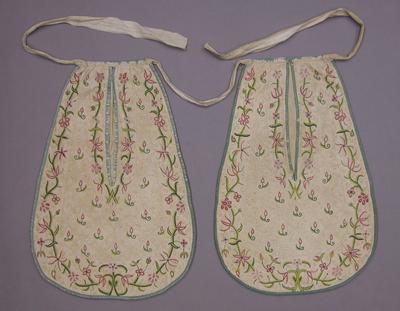 Pockets in the 18th century were often made of linen and elaborately embroidered in colorful silk or wool thread, as with the example above and the following examples. Aren’t these yellow trimmed ones adorable? It looks like the pocket slits are smiling!

This next pair of pockets has beautiful (and intense) embroidery.

This next pocket has a lovely embroidered pattern that looks much simpler to replicate than the previous examples. This is my back up plan if the other, more complicated embroidery proves to be too much.

The pockets with unfinished red embroidery are an excellent example of pocket construction. You can see the manner in which the design is marked as well as the embroidery being completed prior to the pocket being cut out and assembled.

There are also some pockets constructed of silk, such as these, below. These pockets were acquired with a quilted silk petticoat and the Victoria and ALbert Museum assumes that they were intended to be worn together. They look puffy and super cute, but because they are assumed to have such a specific purpose I don’t think they are the right idea for me. Also, I wouldn’t get to embroider! 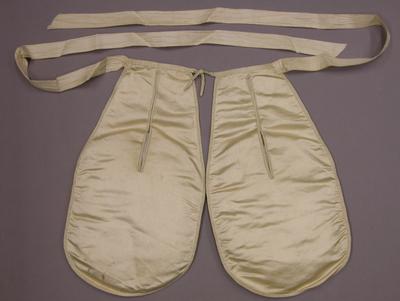 Pockets continued to be used in the 19th century, but they were often constructed of cotton rather than linen and were not as elaborately embroidered as in the pervious century. Some 19th century pockets were constructed of cottons with woven patterns, such as stripes or diamonds as well as the occasional pocket of satin weave cotton fabric. In the middle of the century embroidery was again used as decoration, though the motifs were changed from the 18th century. These next few pockets are just a few 19th century ones I like, either because they use interesting fabrics, or because they are smiling at you!

Do you have a favorite pocket amongst these? Does any pair stand out to you?

All of these pockets were recently available at here, at VADS: the online resource for visual arts; however, VADS appears to no longer be operable (perhaps because of recent US government action to curtail internet copyright infringement?).   Alternatively, the Victoria and Albert Museum has a pretty good selection of pockets, including some of the ones featured on VADS.