As the end of this year draws nearer, I feel the urge to complete my plan to share all the details of my 1814 Vernet Ensemble before the end of 2016. In order to do that, I have the smaller garments to discuss (petticoat and muff) and the witzchoura itself, which I know some people have had questions about for probably about a year. Sorry to keep you waiting!

As I’m saving the witzchoura to be the grand finale, today I want to share some details about the petticoat and muff. First, here are some repeat pictures of the full ensemble in case you’ve started reading since this project was unveiled. Both of these pictures are from my Vernet Project photo shoot in 2015. They give you a good glimpse at the petticoat and the muff. 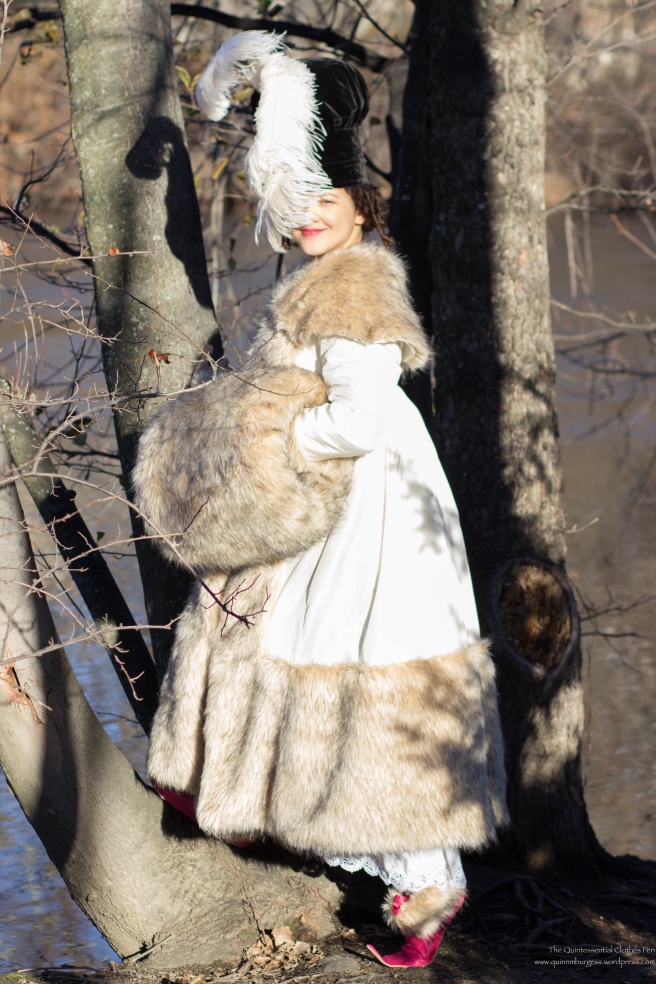 The muff exterior is the same faux fur as the trim on the witzchoura. The lining is an ivory cotton flannel, which feels warmer on the hands than a silk lining and which I don’t think is out of the realm of possibility in terms of historical reasonability (a theory I have tested out with multiple muffs over the last few years).

In order to get the distinctly Regency style of a beehive style muff, the inner flannel lining is substantially smaller in dimension than the exterior fur. Layers of high loft polyester batting fill in the shape and the fur actually wraps to the inside of the lining for a few inches on each side and is gathered to fit the smaller circumference of the lining. The result is a very large and very cozy muff. (This method is different than making the interior and exterior the same or similar in dimensions, resulting a muff that looks like my 1822 one. The blog post sharing details about that muff has lots of great images of both types of muffs from this period, if you want to see more. Also, it’s worth noting that polyester batting would not have been used to keep one’s hands warm in the early 19th century, but that I chose that materials because I had it on hand and it is not visible.) 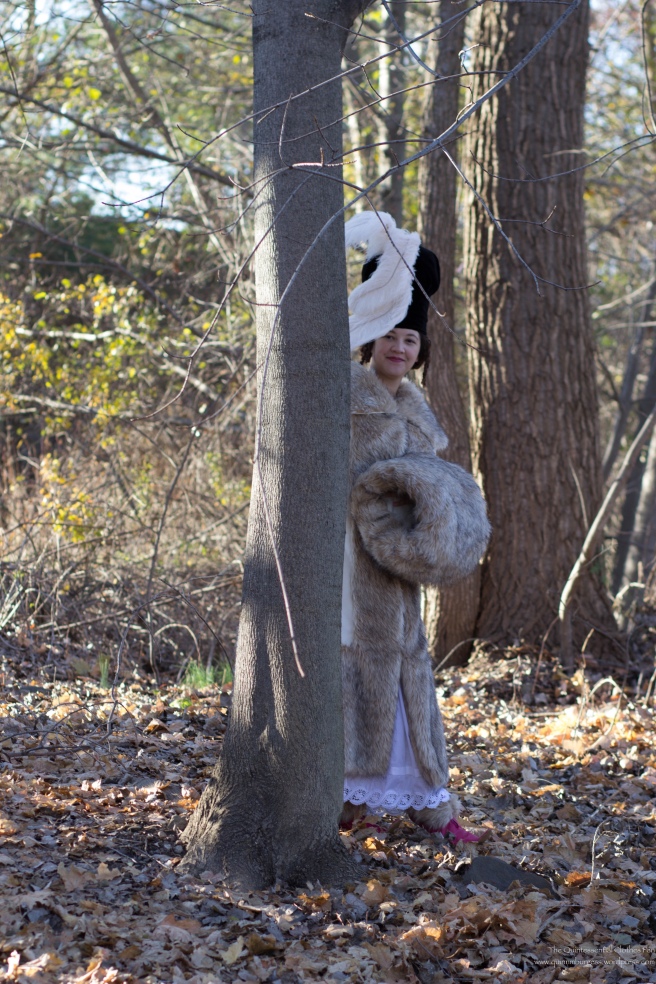 The petticoat is the only piece of my Vernet project that existed before I agreed to participate. It started life as part of a dress, but was removed and languished for years. Turns out I had made it too narrow to dance in, which isn’t very useful in my life. On the bright side, I had just enough of the cotton fabric left to add another panel, thus making the hem circumference much more wearable.

The petticoat had an attached sleeveless bodice before the addition of extra fabric in the skirt, so after adding fullness I was able to simply reattach the bodice. The edges of the bodice are narrow hemmed and it closes at center front with a tie at the waist and a button and loop at the bust. This past blog post discusses extant sleeveless underdresses or petticoats such as this. As with everything else in this project, both this petticoat and the muff are entirely hand sewn. 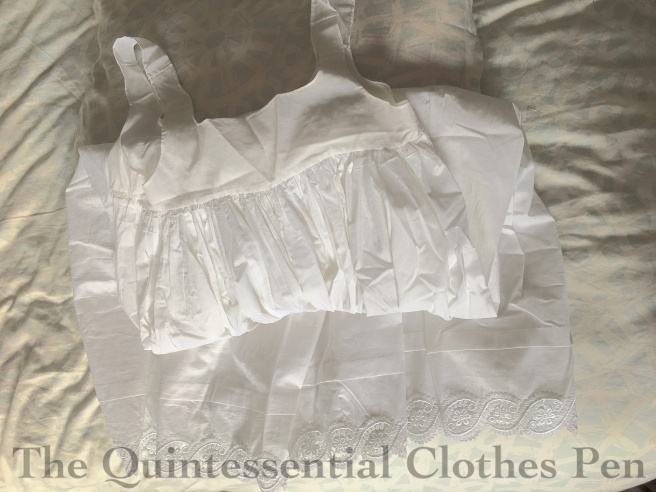 The only other changes I needed to make to the petticoat to use it for the Vernet Project were at the hem. I started by adding lace that mimicked the shape of the embroidery seen in my Vernet fashion plate. I whip stitched the lace on with small stitches and then cut away the fabric behind the lace, creating a lovely scalloped hem. 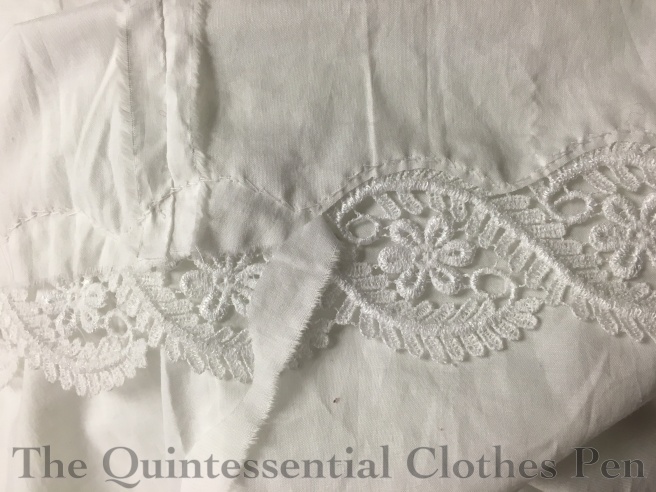 After trying on the petticoat with the finished hem, I decided it was too long and took a tuck above the hem to shorten it. You can see the tuck in one of the photo shoot pictures early in this post.

This final picture is from when I was hemming the witzchoura. While I had that garment on the dress form I also put the petticoat on to determine the placement  of the lace on the previously hemmed petticoat. 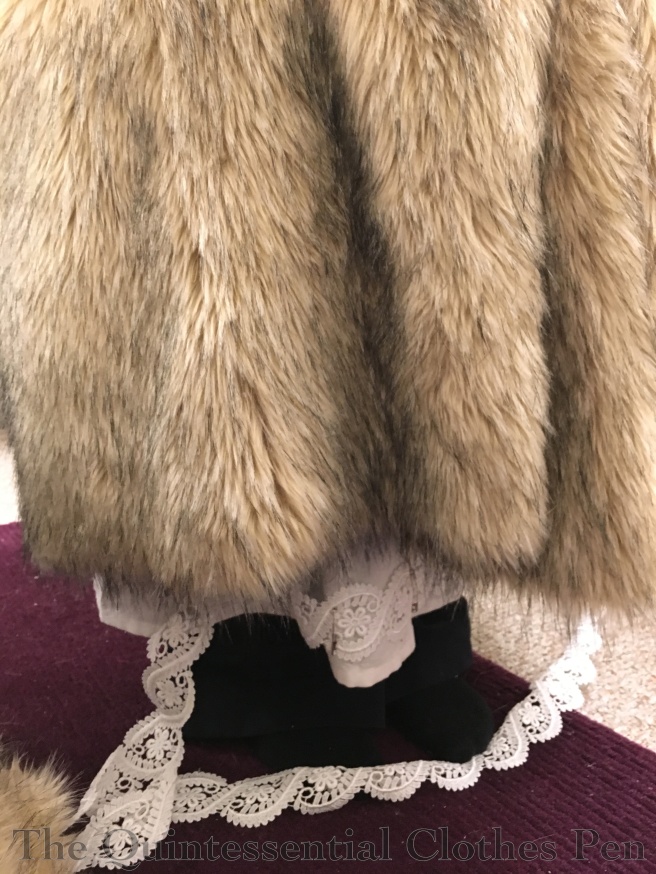 And that’s it! Those two garments were minor in scale compared to the toque de velours, silly shoes, and the witzchoura itself, both in terms of materials and sheer volume of work involved.

This fabulous 1950s dress is great to use to create masquerade looks. First, a wearing a few years ago to an elegant masquerade. Second, a recent wearing to a modern masquerade. Regardless of the type of event, this dress is so flattering and fun to wear!
I finally have photos of the c. 1855 cape I made back in 2011! (Or rather, I’m sharing photos from ten months ago, but who’s counting?) This wool cape is heavy and super warm—you can read more recently published details on my blog (link in bio). . . . #thequinnpenhistoricalsewing #instasew #sewingblogger #historicalsewing #memade #selfdrafted #1850sfashion #1850scape #historicalcostume #historiccostume #historicalcostuming
A back view of my 1830s holiday hairstyle from 2019, featuring a new braid that is my submission for December’s Historical Sew Monthly challenge. Details about how I made the braid are on my blog (link in bio). . . . #HSM2019Dec #instasew #sewingblogger #1830shair #1830sfashion
Happy holiday wishes from the 1830s! The magical star lights in these photos were achieved with a reproduction Petzval lens courtesy of @loveandcrinolines. . . . #thequinnpenhistoricalsewing #instasew #sewingblogger #historicalsewing #memade #selfdrafted #1830sfashion #1830shair
Votes for women! The US Congress passed the 19th amendment in 1919 and it was ratified in 1920. I’m wearing my 1920 Deauville sweater and 1917 wool skirt and blouse to support and celebrate the cause. . . . #memade #thequinnpenhistoricalsewing #selfknitted #historicalknitting #1920s #1920sfashion #1920sknitting #1920ssweater #instasew #sewingblogger #selfdrafted #1920ssewing #womenssuffrage #votesforwomen
Showing off my recently finished sweater, called The Sweater of Determination, or The Deauville. The pattern and inspiration are from a 1920 yarn advertisement. There’s a lengthy blog post about researching and making this sweater on my blog (link in bio). . . . #thequinnpenhistoricalsewing #memade #selfknitted #historicalknitting #1920s #1920sfashion #1920sknitting #1920ssweater