There’s still a post coming soon about the construction details of my 1896 Cycling Ensemble, but I have quite a bit to say so it’s taking a bit of time to write. While working on it I found some great examples of other ingenious bicycling clothing for women patented and advertised around this time.

I mentioned the skirt variations in the introduction post for the cycling ensemble:

“Most women in the 1890s stuck to the traditional, socially acceptable silhouette of an ankle length skirt for bicycling, but this could be dangerous as the skirt could become entangled in the spokes and chain while riding. Solutions to this problem included adaptations to the bicycle, such as a ‘skirt guard’ that sat over the rear wheel and kept the skirt from entangling itself, and adaptations to the clothing, including skirts with cords that could allow them to be raised while riding and skirts that were one piece in the front but split into legs in the back, as with a modern ‘skort’ (a skirt/short combination garment).”

I thought it would be fun to share the patents I found that illustrate these other styles of skirts!

First, an example of a bicycle ‘skirt guard.’ The ‘skirt guard’ is visible on the back wheel on the bicycle. Here is a patent from 1898 showing a skirt guard, as well.

The next patent from 1895 shows the ‘skort’ style. This looks like a skirt in the front but is split in the back. The back is quite full, so that the appearance is that of a skirt.

Then I also came across this unusual method of a skirt with pieces that button on and off in front and back to reveal a bifurcated style underneath from 1895. It looks like this was designed so that the folded up pieces will hang from the front of your bicycle so you have them handy when you arrive at your destination. But I wonder how hard it would be to twist and bend in your corset to button and unbutton all of these connection points? My guess based on personal experience twist and bending in a corset is that it would be quite a challenge to do by yourself! 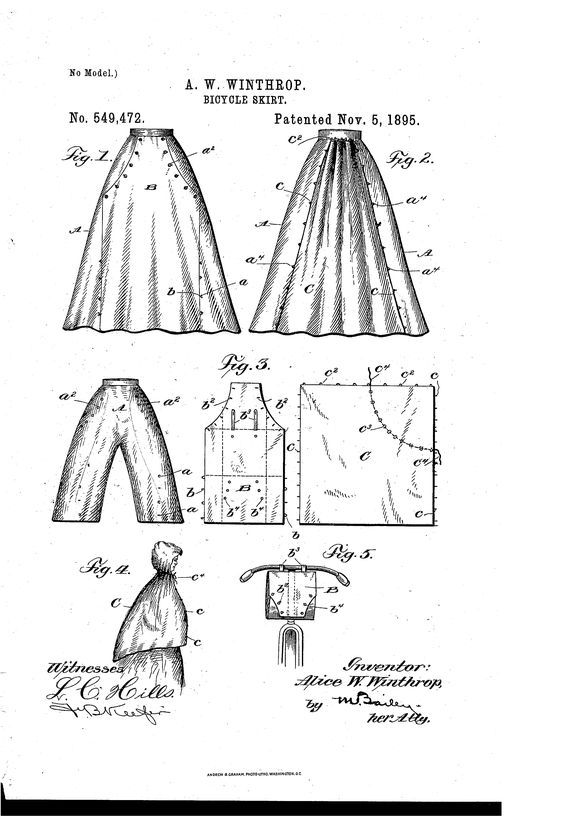 Here’s another interesting patent from 1896. These very full ankle length trousers that look like a skirt can be buttoned up around the knees to turn into knee length bloomers.

This image shows a women clearly wearing bloomers, but with a knee length skirt on top to still give a nod to the 19th century aversion to women opening wearing trousers (or bloomers).

I love that most of these women are shown wearing their gaiters! It’s justification for my own pair. I came across this advertisement for ‘bicycle leggings’ as well. Neat!

Finally, here’s an example of a corset intended specifically for sportswear and athletic pursuits. It makes use of some stiffness as well as some elastic and is expressly made for activities such as bicycling. 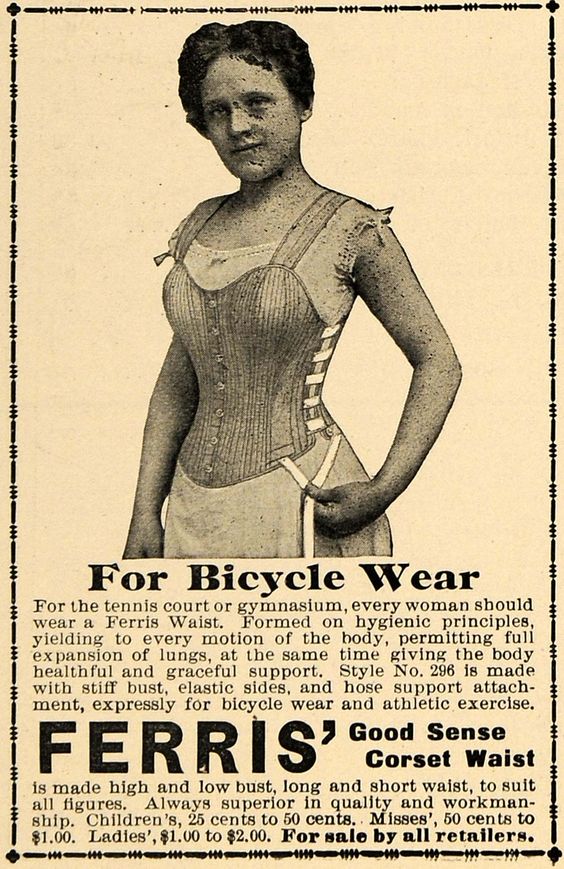