I had already decided this spring that a 1920s bathing suit was on the sewing list for this summer when Gina, of Beauty From Ashes, contacted me and asked if I’d like to test an Edwardian bathing boot pattern for her. I’m pretty sure I squeaked! “Of course!” But then I realized that there was no way I was going to have time to work on the boots before summer when I returned from my trip to Versailles. Luckily, that timing was just fine.

Gina had taken the boot pattern from a pair of extant boots that she owns, sized the pattern for her own feet,  and then made a pair herself (of course with a lot of work on the pattern  along the way). To the right are Gina’s boots, which you can read more about in her post, here.

The idea coincided so closely with my plan for the 1925 bathing suit that I really wanted to push the boot date towards the 1920s and wear them together. I did some digging into bathing boot history in Women’s Shoes in America, 1795-1930 and found some great info supporting my plan, including information about the wearing of stockings with swimsuits and how that practice changed from the end of the 19th century through the 1920s. The following are excerpts from pages 137-139. There’s lots more detail about stockings and bathing shoes in the late 19th century that I haven’t included here, so if that interests you I highly suggest you get your hands on the book.

Bathing shoes were always optional, depending on how rough the terrain was and how tender the feet…

The most common bathing shoe at all times is a low slipper fitted with tapes that cross over the instep in varying arrangements and tie round the ankle. These are shown as early as 1867…

As long as bathing garments covered most of the legs, that is until the late 1870s, stockings were not considered absolutely necessary…

In the late nineteenth and early twentieth centuries, black stockings were very often worn for bathing without any shoe at all… When bathing shoes are shown, they are usually lighter than the stocking…and the commonest style is still the low slipper, presumably cork-soled, with tapes to cross once or twice and tie round the ankle…

About 1915, a new style of bathing footgear appeared, a mid-calf high boot, solid on the sides and back of the leg, but open down the front and laced across the opening… [and] the acceptance of real swimming (as opposed to splashing in the waves) brought about changes in bathing costume… Closer-fitted knitted suits appeared in the 1920s, and gradually the long black stockings were discarded (the last fashion picture I find including them is from 1922). In the late 1910s and early 1920s, short stockings were worn gartered someplace below the knee, but soon even these disappeared and bare legs began to appear in the early 1920s. Bathing shoes were still worn over bare feet when rough ground made them desirable, but they were a matter of utility, not modesty.

Such useful information when deciding what accessories I wanted to wear with my swimsuit and boots! I thought of taking pictures with stockings and without but decided that was too much of a hassle and settled instead for pictures with boots and without. You’ve already seen the pictures without boots. Now for a few with! (Yes, a friend also joined the pattern testing and wore her bathing boots to the beach, too!) 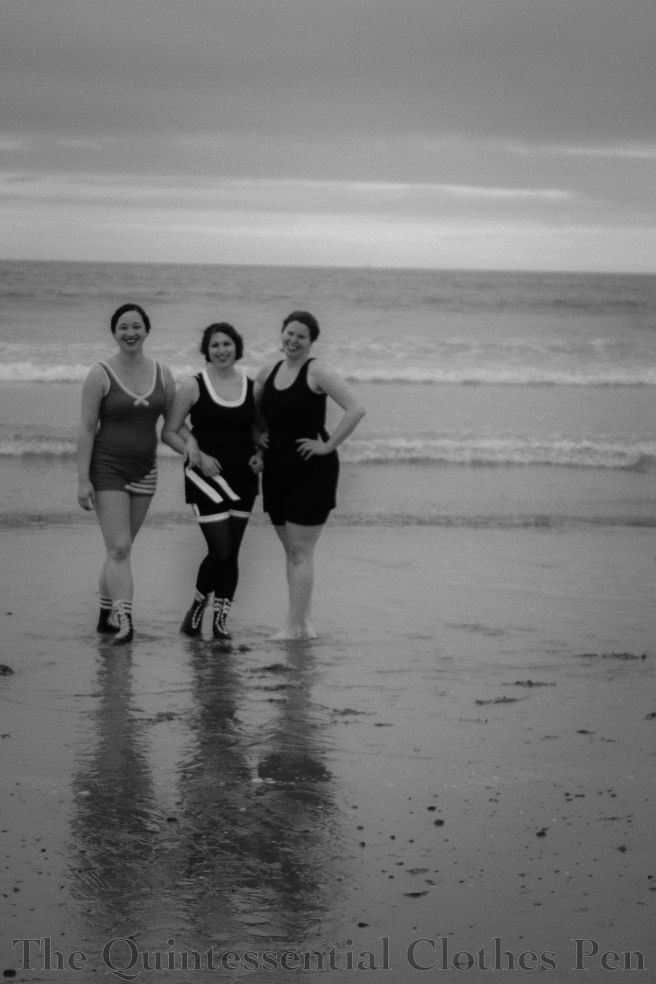 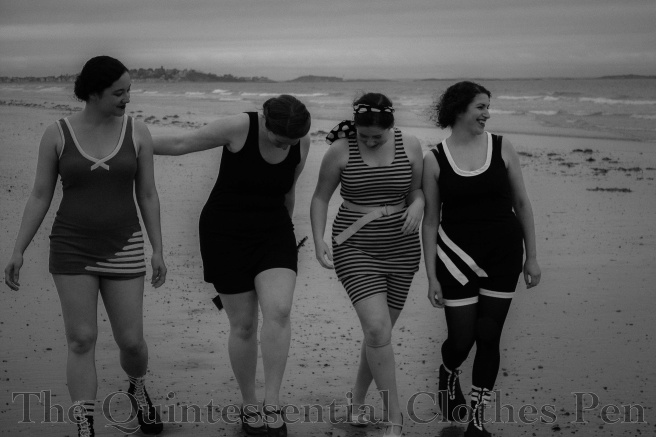 After wearing the boots in the water I took them off for pictures of the suit, but then decided to put them back on. As you might expect, they are less exciting to put on when feet and boots are already wet and covered with sand… though I think all the sand in the boots did give my feet a good exfoliation! 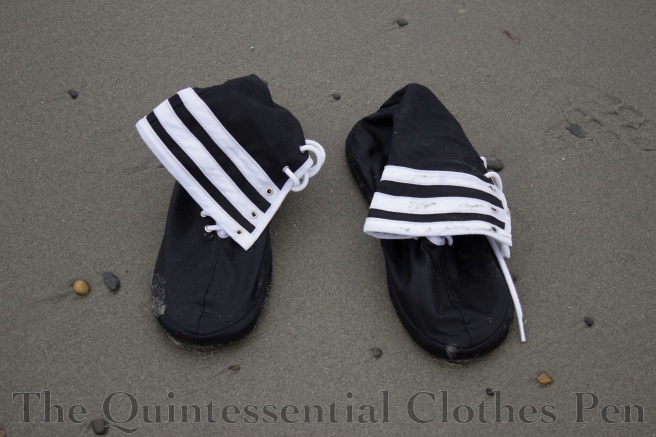 As for construction, here’s a quick run-down. I chose to make my boots out of navy cotton twill and white cotton canvas. Despite the fact that green boots exist, I didn’t want to try and match my greens. Plus, both the navy and white fabrics were in the stash and are neutral enough to wear with any future bathing suit I might decide to build.

Each outsole has two layers of cork bound in bias. Nice and sturdy for walking, but too thick for a sewing machine, which meant a lot of unexpected hand sewing for this project. 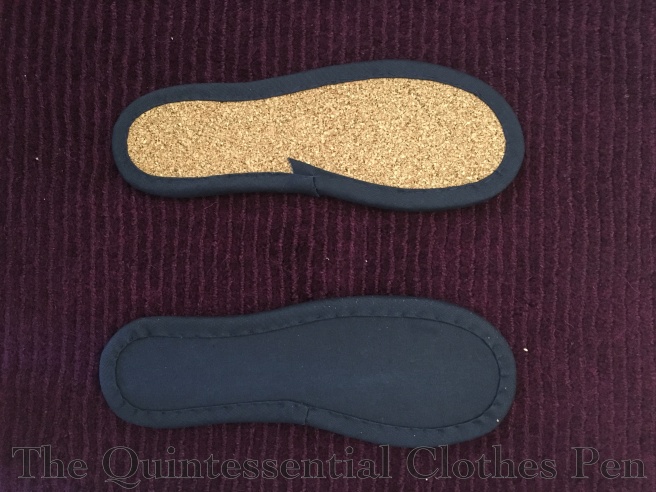 The insoles are a single layer of cork with the fabric glued in place. I just slipped in insoles into the boots for wearing, which meant I could take them out to let them dry after wearing. Given that they were soaked through this was great.

The uppers were fully finished before attaching them to the soles. This part is all machine sewn.

Finally, I hand sewed the uppers to the soles.

(I’ve made this all sound very easy and speedy, but I’ll admit that I took a shortcut and purchased cheap eyelets and a cheap eyelet setter to get the right look with high hopes for the quality. Unfortunately, I was disappointed. The eyelets were such a pain! The setter squashed them unevenly and then I needed pliers to make them look somewhat reasonable and trim off sharp bits. There are 44 eyelets. It took a long time. And it made my hands hurt. It would have been faster for me to hand sew the eyelets. Plus, they rusted after just the one wearing the water! And they got rust on my shoelaces, which was also a pain because the standard round shoelaces barely fit through the eyelets and getting them laced was hours all by itself. Ugh! For next time, I found narrower laces that will be so much easier to use, so I can at least take them out after wearing the boots without it taking forever. Or maybe I just won’t wear them in the water. Anyway, I don’t suggest you follow my example on the cheap eyelet front.)

I am so grateful to Gina for sharing her pattern with me! It takes a lot of work to perfect a pattern and I probably would not have attempted bathing boots without having one already made and in hand.