I decided to make an 1880s bustle dress because I already had all the undergarments, including my still-new-feeling 1880s steam molded corset, and because it’s a period of dress that I rarely wear, especially for dancing. I wanted to experiment with dancing in a bustle to see how it worked and what it felt like.

Design-wise, I was inspired by Mrs. Alice Gwynn Vanderbilt’s Electric Light fancy dress outfit made by Worth in 1883, but wanted to adapt the idea to fabrics I already had on hand. Since the fabric I came up with was navy blue, I decided on Night Sky as my inspiration.

I started my outfit in January and worked on it over the next four months or so, but despite all that preparation time I was still working on it right up until the day before the event. Luckily, I did the vast majority of the work of cutting, sewing, and fitting before March and April when I became super busy. Tasks left at that point included finishing the bodice edges, trimming, and closures.

In addition to the Mrs. Vanderbilt’s inspiration I also looked at other 1880s skirts for draping ideas and other 1880s fancy dress outfits for trimming ideas. You can see the most inspiring images and extant garments on my Pinterest board for this project here.

For ease of documentation, I’ll do the facts as with the HSF:

Pattern: My 1885 Frills and Furbelows Bustle Dress pattern, adapted for evening and for the style of skirt desired.

Notions: A 3yd tinsel garland, 6 star brooches, 3yds of navy polyester ribbon for lacing, hook and bar closures for the skirt, and thread.

How historically accurate is it?: 90%. Recognizable in it’s own time, certainly. Reasonable construction, certainly. Materials, not so much. It was much more important to use what was on hand than to purchase new fabrics, especially since this is an outfit that I don’t see getting a lot of use.

Hours to complete: Tons. I didn’t keep track. Bustles are fussy and require lots of time with a dress form to achieve an elegant drape.

Total cost: Most of the fabrics were in the stash with the exception of the silver net and most of the notions were purchased cheaply on eBay. Let’s say $20. 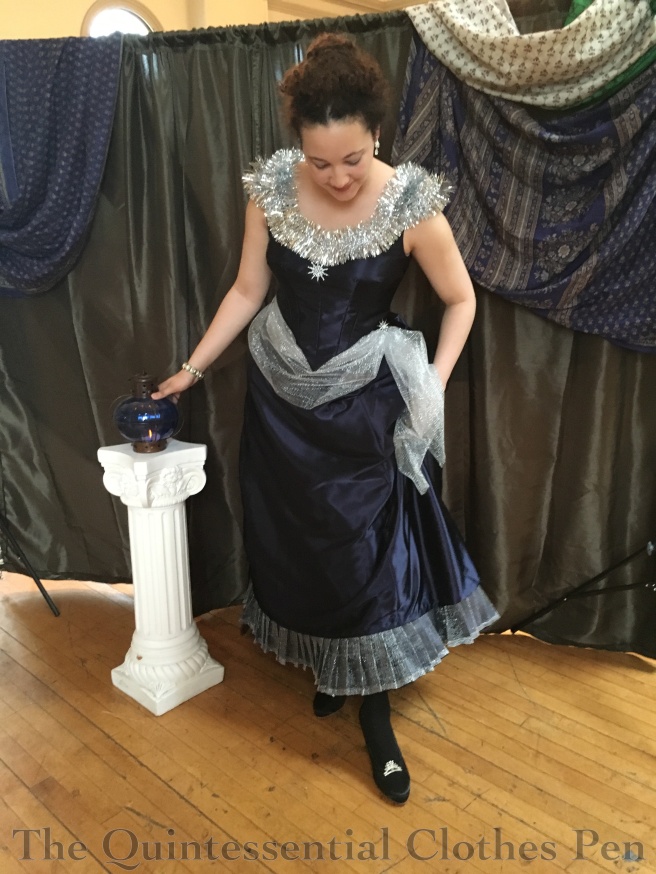 For the photos I wore the dress with my black Seaburys and the new rhinestone shoe clips that I purchased in March. It was quite sparkly and elegant, but for dancing I changed into navy blue velvet flats. They were just as cute but did not get the special treatment of being shown off in photos.

I had the grand idea to use my curly hair ends flipped up on top of my head like the curled fringe popular in the 1880s. It’s also long enough that I was able to make the bun shape on the back also using only my natural hair. I pinned in star brooches to match those on my dress as decoration. 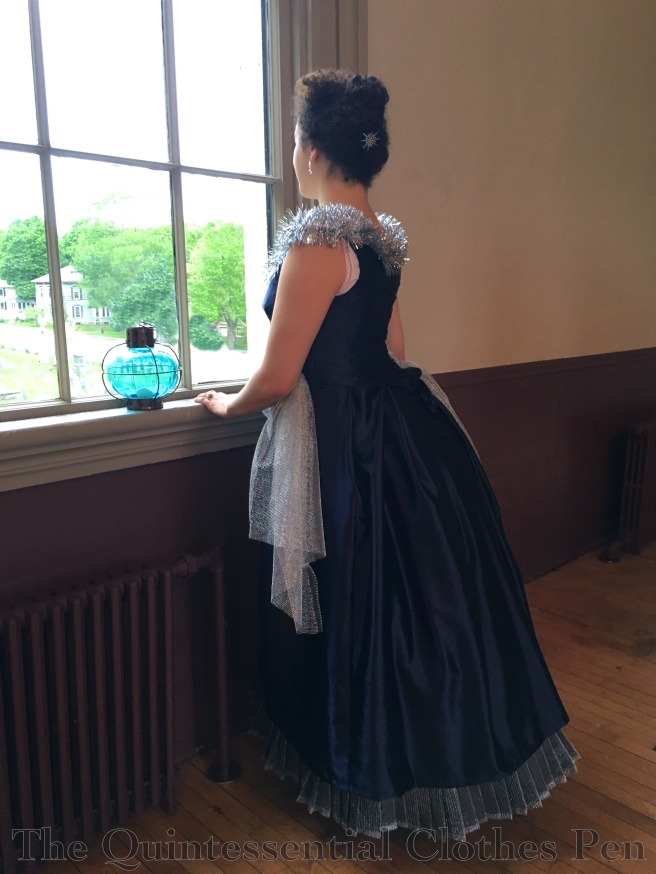 All in all I’m quite happy with the final result! Dancing in the bustle was just as easy as any other Victorian style. The differences were that all the extra fabric was behind me making some movements more challenging due to space such as during a quadrille, and that the bustle and layers of fabric on the back gathered a fair bit of momentum when turning, creating quite a swish!

Construction wise the only change I would like to make after one wearing is to bone the center back edges so that the back lies flat when laced onto my body and to sew in a matching fabric piece behind the lacing holes to hide any white from undergarments that wants to peak out. I’ll also need to wear a different chemise or tuck the top down so there’s not white cotton poking out at the armholes. However, these are minor changes and I’m not sure when I’ll have the opportunity to wear this again so it might be awhile before they happen.

For this ball we set up a double sided picture backdrop, one side of which you’ve already seen. The other side included a large stuffed jaguar/panther I dubbed Jaggy for the night. You often see backdrops in regular Victorian photos as well as fancy dress photos. Unfortunately, with my heels on I was too tall for them! Oops! Being too tall inspired me to take some fun sitting photos.

For decoration out of the ordinary, we had the lucky and unexpected use of the fabulous blue and turquoise lanterns in many of the pictures as well as multicolored paper lanterns with lights inside. We put the lanterns around the room in glass vases as bouquets. First, a picture from the set up part of the evening. Second, a picture with some lanterns creeping into the photo. 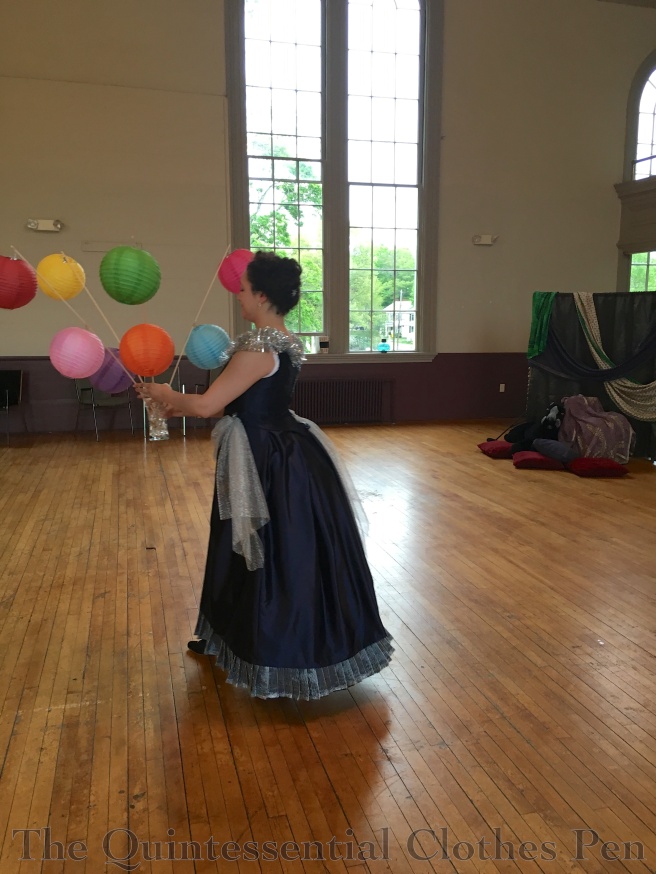 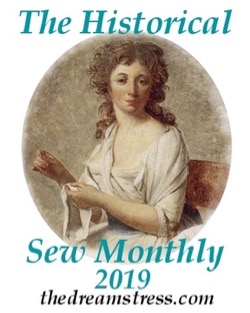