Today I have a new dress adventure to share with you: the second wearing of my 1926 Silver Lace Robe de Style to a Gatsby Ball in January. The last time I wore this dress was last August, so it was fun to bring it out again. I thought it fit in nicely with the idea of blue and silver for the new year, even though it wasn’t technically a new year themed event.

The robe de style dress was popularized during the 1920s particularly by the designer Lanvin. This alternative to the popular straight silhouette dresses of the 1920s is characterized by a dropped waist with wide skirts. Many of these dresses have panniers in them that are borrowed from the style of 18th century court dresses. Here is a little more information about the robe de style from the FIDM museum if you’d like to read more.

I have another more dramatic robe de style already, so this lace one is more of a nod to the robe de style, with softly gathered sections at the hips and no panniers or other understructure.

(My 1924 Golden Robe de Style is the more dramatic one. I made that dress in 2015 and posted about the construction of it this past post. Since then I have updated the trim on it to be much better suited to the dress. You can see the new trimming in these two past posts: in 2016 and in 2017.)

Last August I wore this dress with silver accessories: silver American Duchess Seaburys and silver hairpins. This time I decided to try my black Seaburys with silver rhinestone shoe clips, an ostrich feather/rhinestone hairpin (this is the same decoration I had in my hair for my 2016 Versailles look–how fitting to wear it again with a dress that has a nod to the shape of the gown I wore that night!), and my newly made black velvet handbag. It’s a bit hard to see the handbag in these photos, but if you look for it you can spot it in one hand or the other in most photos. Trying to show it off and not look ridiculous was a bit of a challenge.

(As a another side note, that same hairpin works really well for the 1890s, too! Who knew it could so easily shift between not only decades, but centuries!) 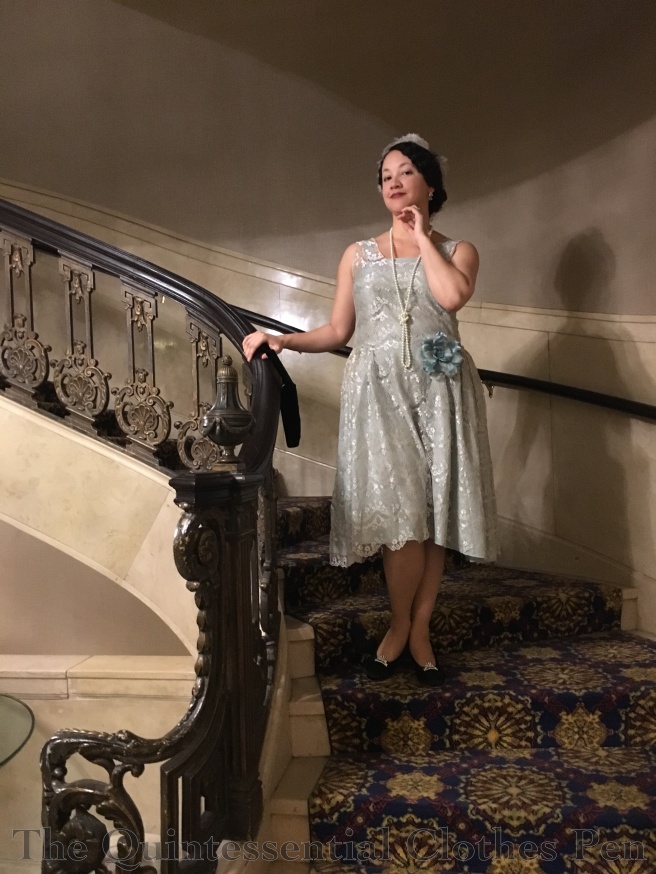 While packing and getting dressed, I couldn’t decide which dress to wear to the ball: this silver robe de style or my 1927 Blush Sparkle Dress. I brought both of them with me to the event and only made a decision when I realized that a friend hadn’t brought a sparkly dress to wear. (Never fear, she had a dress, just not a sparkly one!) The fabulous architecture of the The Fairmont Copley Plaza Hotel really called for some sparkle, so I wore the robe de style and loaned her the blush sparkle dress. It was fun to see it sparkling around the ballroom!

Showing off two different styles of 1920s dresses. Blush Sparkle on the left and Silver Robe de Style on the right. It’s hard to lounge and not look silly. This was one of the best we got! 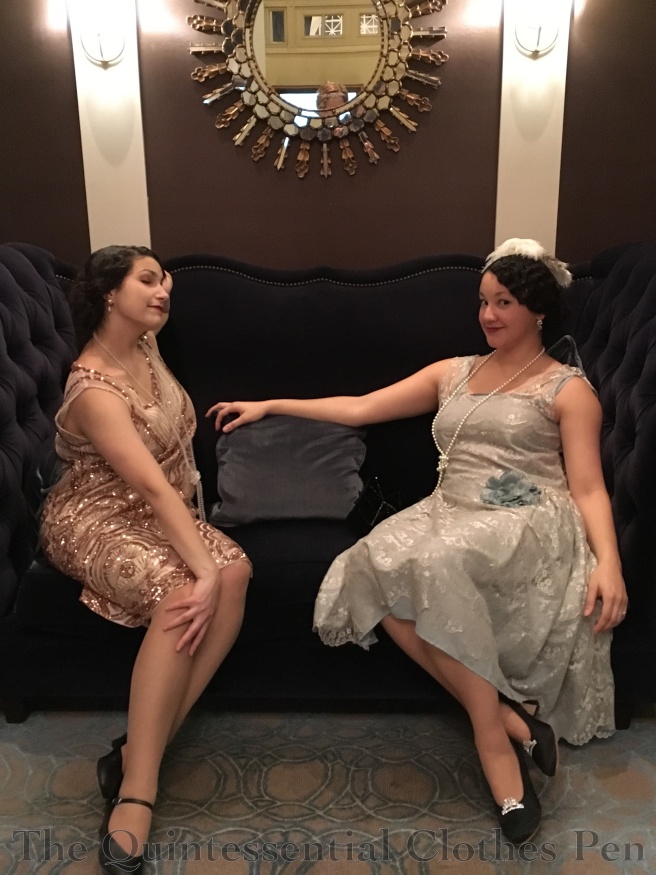 After the second wearing, I am still pleased with this dress. It’s fun to dance in and a bit unusual in style: qualities that suit me perfectly.

I think I like this dramatic black and ostrich styling best so far. Do you have a preference between the first styling with silver accessories and this second wearing?