Spots are this nifty piece of hardware that can be used to secure interlocking pieces together. They’re similar to a brad in that they have two prongs on the back of a circular top. The difference I see is that they have a domed top and the prongs come out from other side rather than the center. 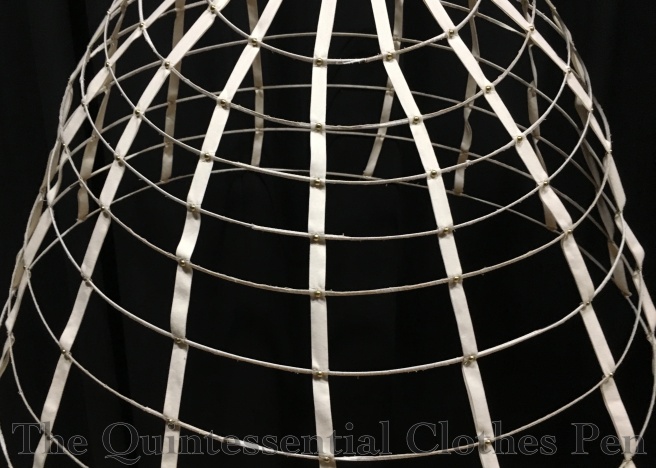 For the new smaller hoops I used brass colored spots, but I decided to change it up for my older hoops and used gold colored spots instead. (Both of the spots were purchased from this seller on eBay, who I would certainly recommend.) I’d originally intended the vertical tapes on these old hoops to be able to slide around when needed so that I could force the hoops into an elliptical shape, but since I haven’t done that even once in the last ten years I figured that if/when I want elliptical hoops I’ll make a new support structure and will reinforce these hoops in their current cupcake shape instead of contingent to allow them to be adjustable.

My spots are positioned so that the prongs are at the top and bottom of each horizontal wire. I poked the prongs through the twill tape then used pliers to bend the prongs towards each other to secure them in place. The nice thing about the spots is that as they are folded back you have control over how tightly they are attached. So technically they are still loose enough that I can scoot the vertical tapes around if I really want to. But will I? Probably not.