I knew I wanted a cloche to go with my 1925 Blue Coral Dress from early on in the process of making it. It was going to be hot when I wore the dress, so I knew I wanted something that would both look and feel lightweight. Turns out any hat was warmer than a bare head (well, one with hair on it!), but that being said, I think this was on the right track with a lightweight hat.

I considered making the cloche from fabric, but couldn’t decide on a style with seams that I liked. However, as I was browsing my Pinterest board, my eyes kept settling on straw, horsehair, and lace hats. It seemed like that was the way to go. 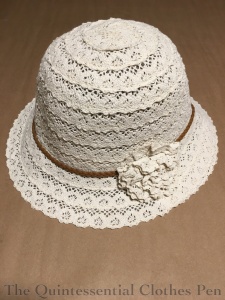 I didn’t have any particular materials on hand or in mind for that type of hat but I had come across a modern cotton lace cloche on Amazon for $14 that seemed like a good starting point. It’s no longer available, but I’m sure a careful search could find something similar. To the right is what it looked like before I started changing it up.

Generally, modern cloches have such a deep crown that they don’t leave any space for hair arranged on the back of the head. I have long hair, so that just doesn’t work for me. Cloches from the 1920s frequently have a cutout in the back to allow for your neck… or hair! They also have more interesting brims than modern cloches often do. Perfect. That’s what I wanted. An interesting brim and a cutout for my hair.

With my design plan in place, I started disassembling the modern cloche. First, I removed the braided band and flower. Then, I started unwrapping the lace on the brim, taking out the stitching that held one circumference to the next. I stopped at the bottom of the crown. I removed the inner hat band for most of the way around the hat, so I could stitch the new brim shape and the back cutout without stitching through the hat band.

Next, I played with the lace I had unwrapped for the brim to decide on a new shape. Once I made some decisions I had to make a few shorter pieces out of the lace, but most of it I tried to keep intact. In the back, I decided where I wanted my cut out to be… and cut it! Then I bound the edge using the lace and topstitched it down to encase the edges.

It was a bit tricky to find an acceptable shape for the new brim. The first few tries were so similar in shape to the crown of the hat that they hardly showed when I put it on my head. I ended up with a brim that flares out a bit so it stands away from the crown of the hat, especially in the front. I had to be careful to cover the ends of the plastic horsehair braid that backs the cotton lace, as it is very poky when cut. I covered the ends either by turning them under or having the inner hat band cover them.

After sorting out the brim and back cutout it was time to reattach the inner hat band. Then I sewed on my trim. Here’s what the hat looked like on the inside after all that. 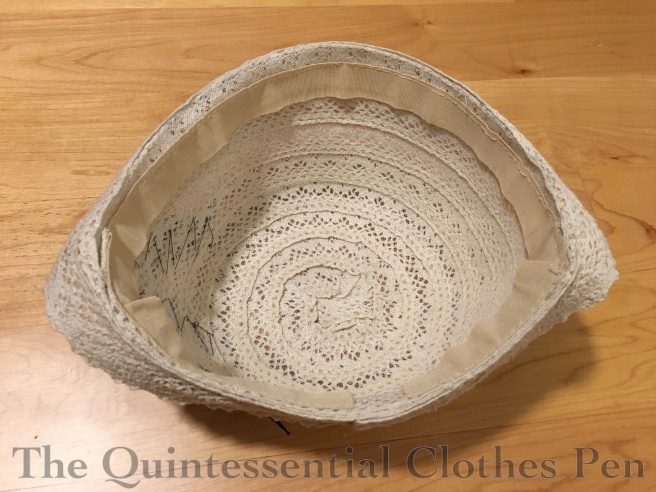 I’ve loved Leimomi’s cloche decoration in this post since she posted about it in 2014. Having that in mind, I thought of what bits of trim I already had in my stash and what might work for this hat. I decided on a random yard of navy grosgrain ribbon, which I cut into thirds, pleated, and attached in imitation of this hat. 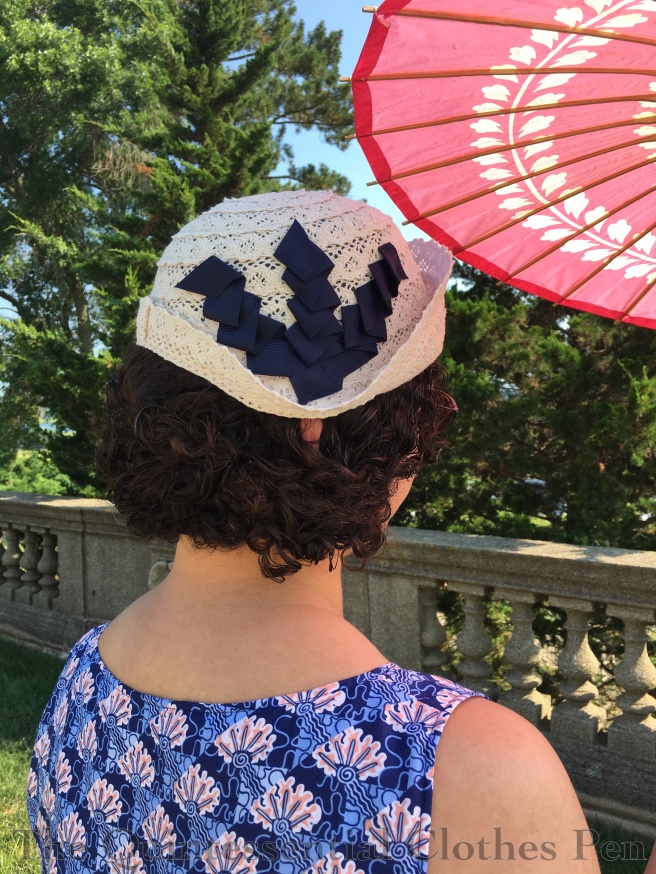 When I styled my hair, I tried to have hair come down to my jawline more than I usually do. I think cloches look less silly if there is some hair showing around them. My hair didn’t really look like a bob, but at least there was some hair showing in the front. In the back, it was pinned into a low twist-y mass of curls.

The great thing about the materials of this hat is that they are intended to be flexible for packing and traveling. Not only is it easy to store this hat but it’s also easy to remove it at a picnic and leave it on the blanket or put it in a bag without worrying that it will be damaged. It can get crushed and bounce back into shape!

In the end, I continue to think my head looks like an egg when I wear a cloche. I like styles that don’t hug my head better! That’s my own feeling–other people don’t think it’s nearly as egg-like as I do! But as egg-heads go, this was better than some attempts, so I think we’ll call it a success! It certainly looks cute on the fence!