In June, I went to a picnic in the Boston Public Garden. As it was an open era event, I decided to wear my 1953 dot dress because it is easy and cool to wear in the summer heat.

I took a long time styling my hair to look like this image from 1954. It’s quite a feat to tame the frizz and there was a moment of woe and frustration, but I didn’t have time to start again, so I continued on and was happy with the end result despite the angst in the middle of the process. Looking effortless is so much work!

Picnicking! I plopped down to eat and then didn’t move much until picture time.

I love how the pictures turned out! I purchased a new parasol to use this summer for 1920s events, but it matched this dress very nicely so I brought it along to the picnic. Raspberry is one of my favorite colors.

There was a crowd of people watching the picnic most of the day, but we managed to get a lot of pictures without them. Yay! I don’t mind being gawked at (I’m rather used to it actually) but I do usually like images that don’t have modern dressed people in the background better.

The palms remind me of Florida, and this picture’s story in my head is that I’m on vacation there in the 1950s. 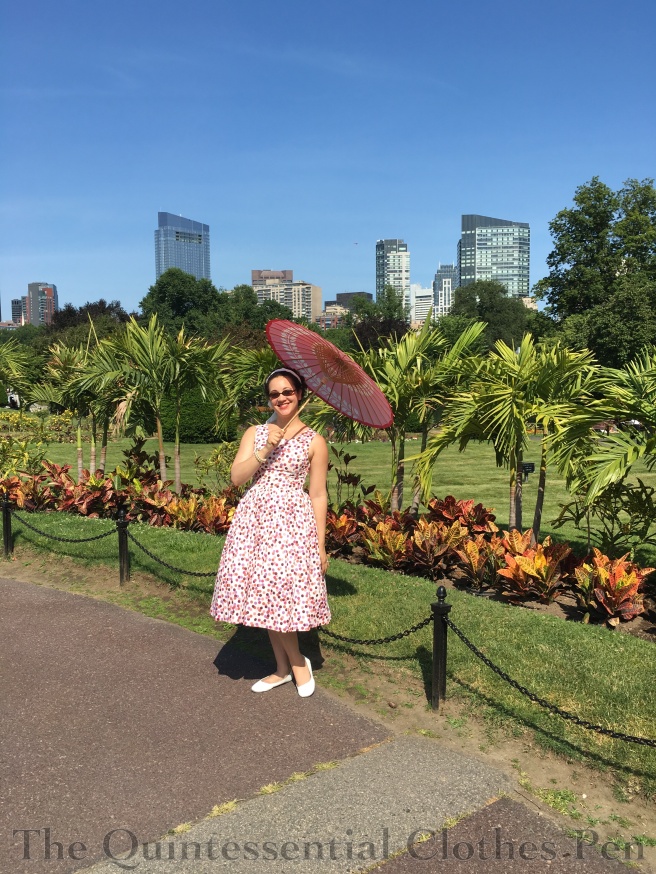 I may look composed in these pictures, but when I run out of pre-thought pose ideas chaos ensures. I often start waving my arms around wildly, talking (producing odd faces when captured as a picture), and flinging my legs around. Here’s an example. There are a a range of caption ideas that pop into my head here: ‘hi-ya!’ and ‘at the bat’ most often.

I hope you’re enjoying your summer, too! It’s so nice that the days are long and there are lovely days for sitting in the park or other outdoor activities!