I made my (first) and last 1890s ball gown in 2012. It is from 1893, with super poof sleeves, and is lovely, but after wearing it to more events than I’ve kept track of without serious thought (which means somewhere over 5 and probably under 10), I was growing tired of it and wanted something new. (Of course, now I’m curious when I wore it. Let’s see: last January’s 1890s ball in 2015, the Nahant Vintage Dance Weekend Grand Ball in 2014, a December Victorian ball in 2013 where I solved the problem of it sliding off my shoulders when I wore it for the first time during Newport Vintage Dance Week in 2012, plus various performances.)

I already had inspiration pinned to a board, I had fabric in the stash (the fabric is more of the same elusive blue I used to make my 1811 evening gown in 2014–it time travels!), and I had an opportunity to wear an 1890s gown this past month! With a vague plan in mind, I started the skirts* sometime in the fall with the sincere hope of getting a fair bit done on them, but only got as far as cutting them out, after which they languished in the closet while I worked on other projects. Languishing is a variation on procrastination, which is the HSF challenge for this January. And so, with the languishing having finished its course, here is the finished new gown. 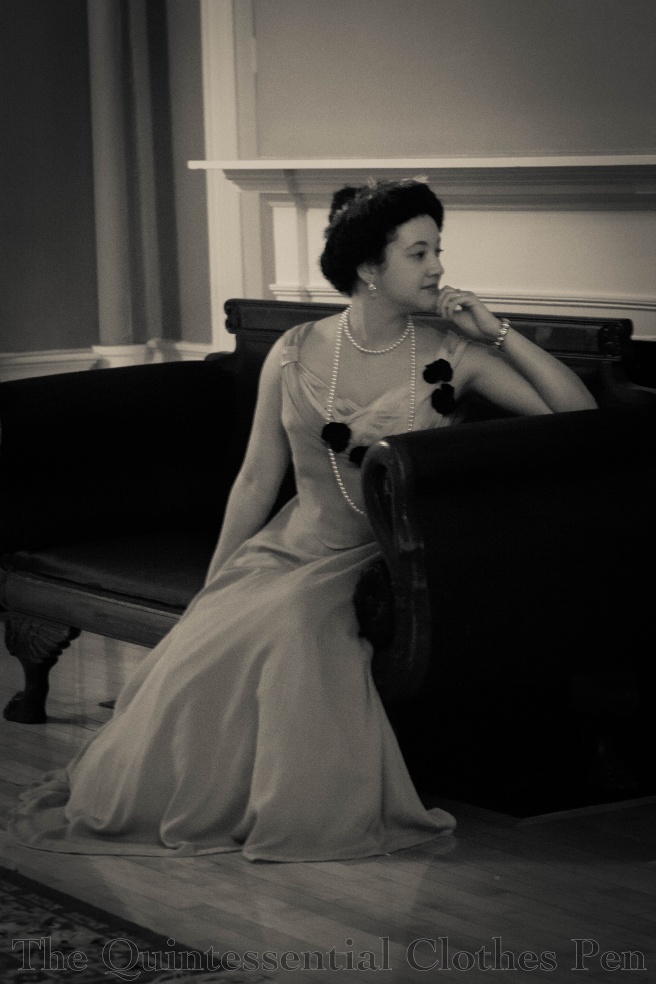 Pattern: Created by me, with reference to Janet Arnold dresses from the 1890s.

How historically accurate is it?: Definitely recognizable in its own time. The silhouette is spot on. The colors are inspired by extant clothing. The construction is mostly accurate. The materials are a mix of accurate and inaccurate. I’ll give it 80%.

Hours to complete:  Many. I worked on this over a few months.

(The low cost is due to the fact that the chiffon and lining fabrics were purchased for the amazing price of $1/yard and that many of the notions and small bits were in my fabric stash.) 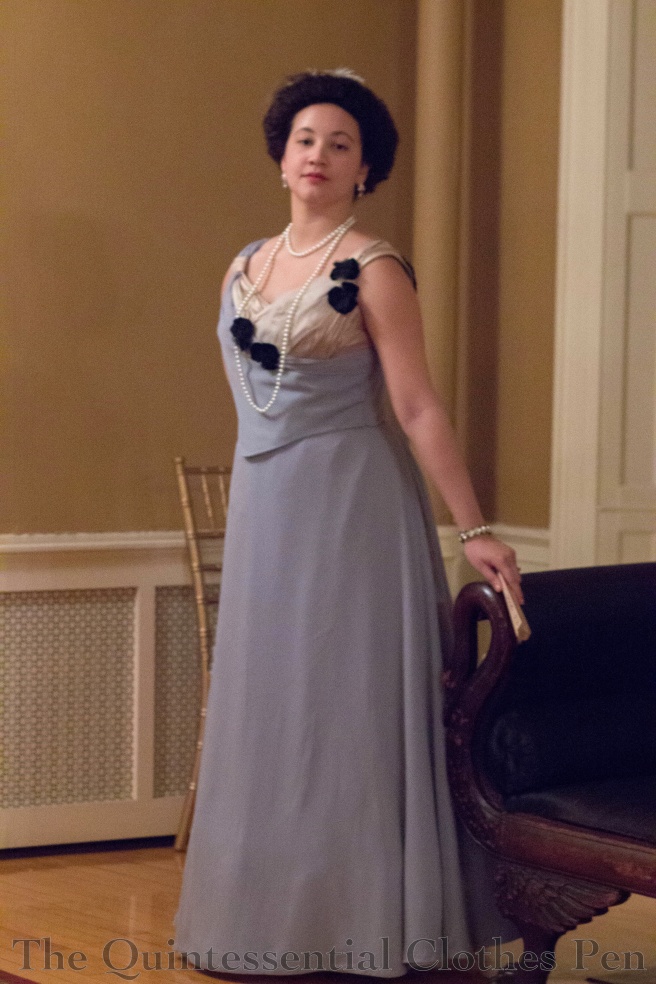 For the bodice, I started with the pattern for my 1893 gown (which was adapted from Janet Arnold originally). The back needed very slight alteration, but the front had quite a few changes, due to being worn over my new 1880s corset  and because I wanted different dart placements, neckline, a front/side hidden closure, etc. I did multiple mock-up fittings (no pictures, sorry) before feeling ready to cut real fabric.

Here is the bodice in the middle stages on construction. You’d never guess from the exterior, but the bodice is flat lined with pink! This is not a standard lining color, but I had it on hand, it is the right weight (with a glazed finish, which is standard), and it amused me. By this point, I’d finished my edges, adding boning, nicely finished my interior seam allowances, and covered the back with elusive blue lining and chiffon cut on the bias.

Next was creating the front bodice main piece, which is also on the bias. I draped it and then bagged the lining/chiffon with the robin’s egg cotton to create nice finished edges. The flapping bit on the left of the picture was turned under and hand sewn later in the process.

Draping the silk was next. There are actually a number of small pieces carefully pleated before being hand sewn in place.

My original main inspiration was this gown at the Met (and the alternate skirt follows this idea quite closely), but when I looked at my material options, I really loved this variation, also from the Met. Other dresses with a similar cut were also influential, including this, this, and this. Here’s a similar example that clearly shows the shadow of a side closure.

In the next picture, both the left and right sides have been covered in silk. Each side of the bust layers and attaches separately. I also started playing with flower placement at this point. I was inspired to add black accents to the otherwise subdued colors by this dress. I really like how the black pops!

Here’s the back around the same stage. 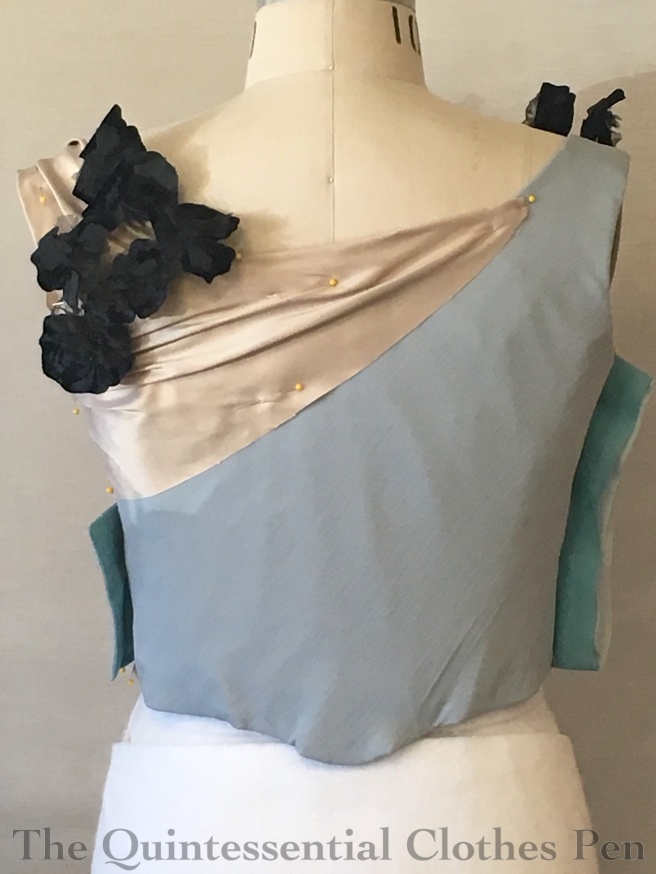 At this stage, I’ve added gauze and tulle to the front and am playing with the chiffon edging. The flowers are tucked into place to see the effect. I’ve also sewn down the proper right (left in the picture) side. The proper left (right in the picture) side is pinned and tucked, waiting for a final fitting before finishing and adding closures.

The back also received a treatment of gauze and tulle in addition to a chiffon edging. You can see that the flowers came in stems of three (these are another part of one of two huge hauls of millinery flowers for super cheap that I’ve had in the last few years, yay!).

Sewing down all the pleats just so, in order to look natural and not constrained, took rather a long time, as did nicely tucking all the silk around the armhole. But it was worth it!

Here is the inside of the bodice, finished. I decided to bind the seam allowances in the same robin’s egg blue cotton that I used for bias binding for the edges and armholes. A hong kong finish is not accurate, but I didn’t feel like hand whip stitching all the seam allowances (although, in the end, it probably would have taken just as much time, or less), plus, I enjoy the effect. There are also closures (yay!) and a waist tape. 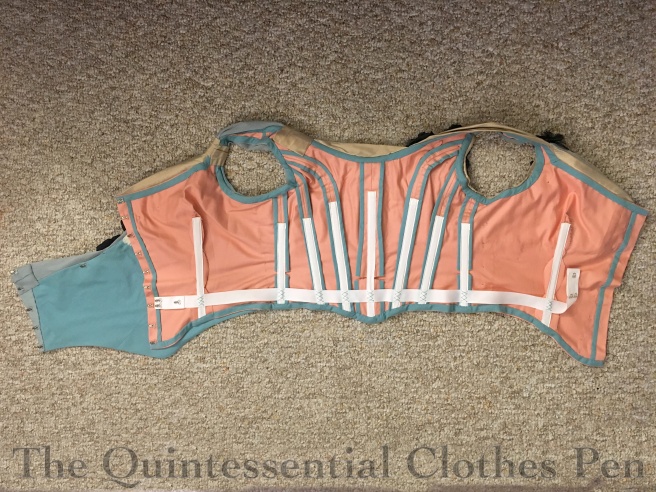 And here’s what the bodice looks like with center fronts together. The bit with the tulle actually hooks over the other side (but pictured this way, you can see the closures). After that, the front panel hooks across the front and is securely hooked at the side seam, effectively covering my pink lining. 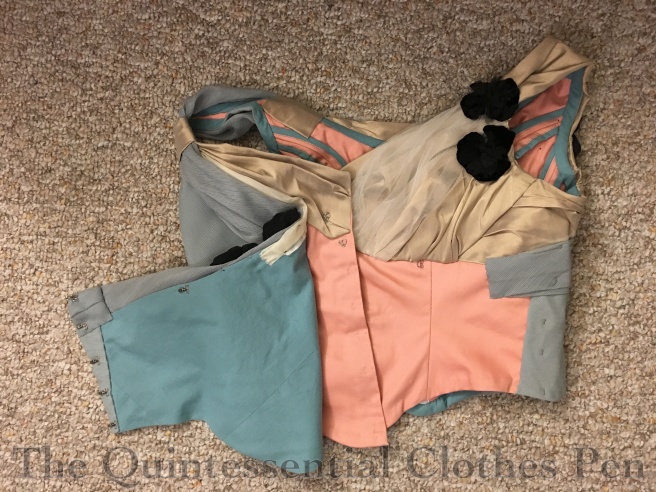 The untrained skirt is flat in front and gathered at the back. It is cut in an umbrella shape (like my 1895 skating ensemble skirt), so that the only seams needed are center back, and a diagonal seam across the back to add width to the panel. The waistband and placket are standard 19th century style, with the exception of the fact that the ribbon I used to stabilize the thin fabrics is leftover gift wrapping ribbon from wedding gifts we received from Crate and Barrel. Yay! It’s hidden on the inside and folded in half, but it amuses me, because recycling is great and it’s nice to have a bit of Mr. Q-related-something in a dress.

The most annoying thing about fitting this gown was marking the hem on the skirt. (Fitting the bodice on myself with all the layered closures was also a feat, but more uncomfortable twisting than annoying.) Chiffon is annoying to hem most of the time and it only gets more complicated when you’re marking the hem on yourself. It meant looking in the mirror, bending over to place a marking pin while everything shifted, standing up to check things, and then repeating that over and over again to shift pins by tiny amounts until they all looked good (while wearing a corset and fluffy petticoat of course, so the whole thing would hang properly on my body). Once that was all over, I hemmed each layer with self fabric bias that is turned to the inside and invisibly hand stitched in place.

I was quite successful, but it took a whole afternoon to mark and cut and sew the hem of the chiffon and of the lining (because of course the lining couldn’t stick out or be too short!). The whole thing would have been much speedier if I’d had someone else to mark the hem for me. (I thought of using my hem puffer, but the floor is too close for the puffer to reach and I didn’t have anything to stand on.)

Anyway, the end effect was fabulous. The chiffon and lining swooshed so beautifully that it was necessary to get “swooshy skirt” pictures at the ball just to highlight their movement.

The ball also gave me an opportunity to have fabulous hair and a new hair ornament instead of a tiara as well as an opportunity to photograph my new 1880s corset completely finished and the fabulous petticoat I have for 1890s/1900s styles. It gets worn often, but hardly ever seen (which I suppose is rather the point of a petticoat, but when you have one as lovely as this, it really should be seen!). There will be future posts for the hair and undergarments, as this post is getting pretty long.

Overall, 1890s ball was lovely, with beautiful dresses and beautiful dancers. There were fun new people as well as quiet moments to sit and have engaging exchanges with friends.

And the new gown was very comfortable and fun to wear. I’m looking forward to completing the trained skirt (hopefully without too much procrastination) and wearing it this summer!

*My plan is to have two skirts for this gown, one without a train, for dancing, and one with a train, because trains are fun! I only finished the non-trained skirt for the ball, though the trained skirt is assembled and mostly finished with the exception of a closure and hems.