My last two posts were aimed at sharing photos of my black wool 3/4 circle skirt and 1950s boysenberry raglan cardigan. Those posts both included a bunch of photos, all of which were taken during a magical walk through the woods, but there were many wonderful photos in addition to those that I didn’t feel needed to be added to the garment documentation posts.

Hopefully this is a nice ‘armchair’ outing into the snowy, magical woods! Welcome to the adventure! 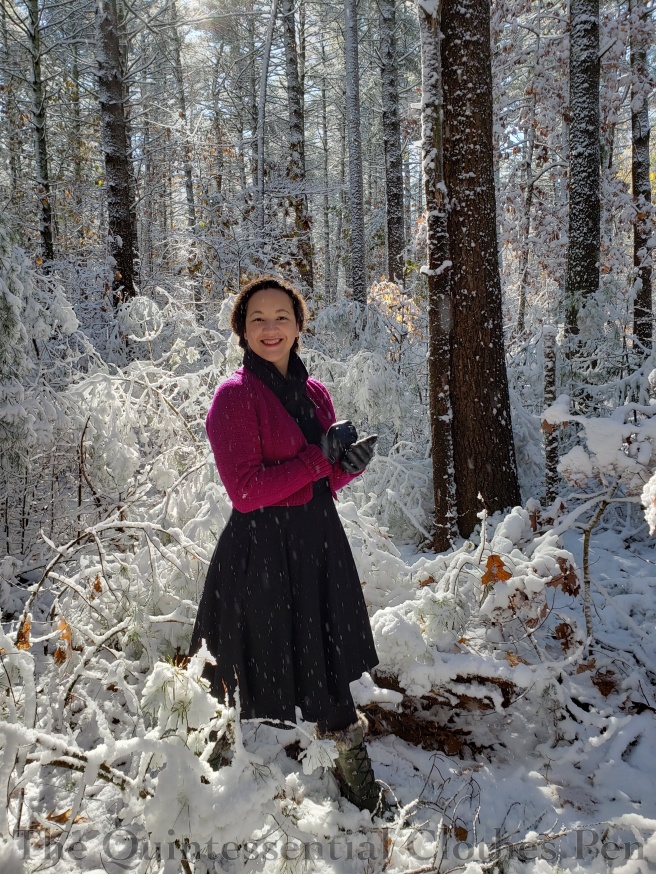 This snow was very early–occurring on October 30. Due to that early date, there was a beautiful mix of iconic golden bronze New England leaves still on the trees as well as on the ground, mixed with the snow.

The snow was rather sticky, as you can see in the photos, so not only was it clinging to the trunks and branches, but it also clung to the leaves. The combination of slanting sunlight filtering through the trees created an incredible glow. 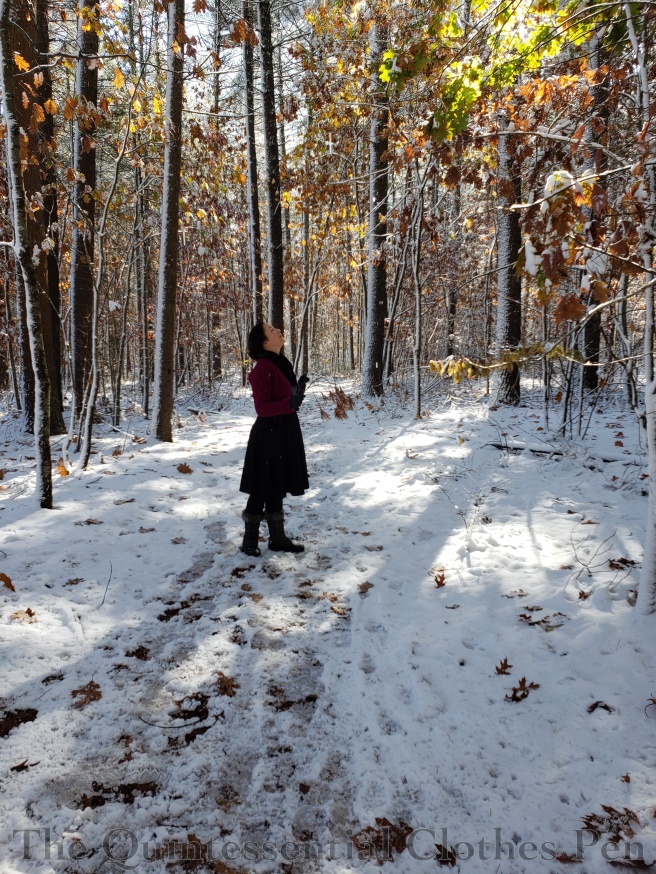 The snow, only a few inches deep, created a quiet hush over the woods. It provided enticing opportunities to step off the paths, something that is less likely during other seasons, when branches are full of leaves and poison ivy might be lurking in the undergrowth.

In between photos, I donned my coat and orange vest. Safety is important when it’s hunting season in the woods! 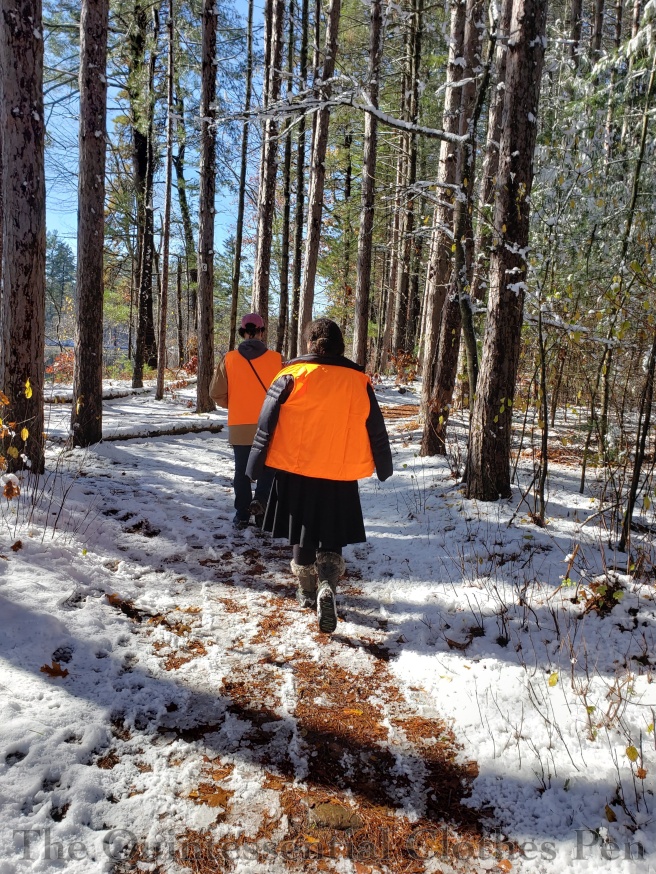 I found it quite tempting to pause and listen to stillness, admiring the majestic height of the pine trees and the beauty of the forest. 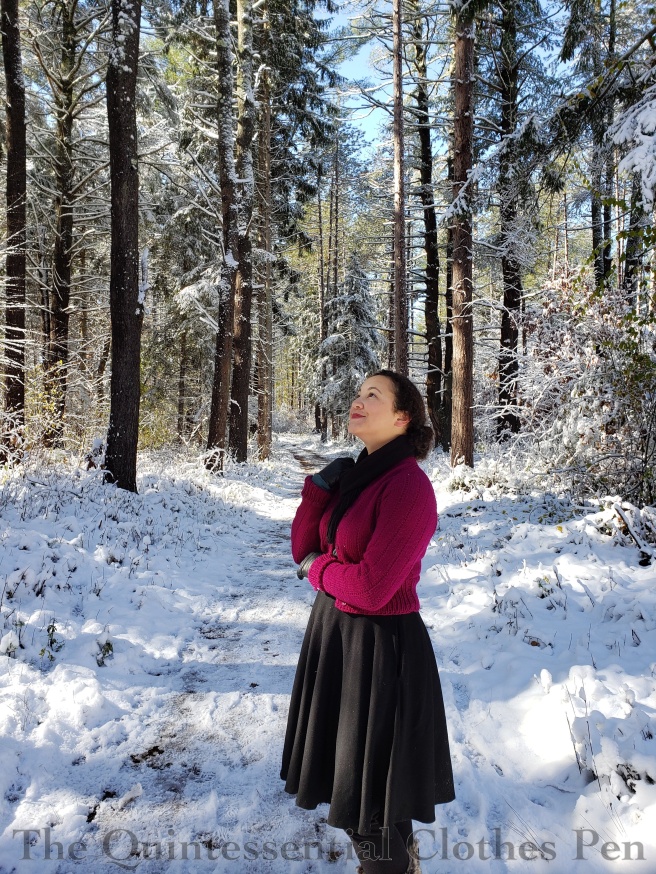 It was fascinating to see how the wooded areas bathed in shadows retained much of the snow throughout the walk, while areas that were in more direct sunlight were quite clear of snow. Look at the contrast!

The colors were so vibrant! The mix of bronze leaves on the trees and ground, green algae on the river, boysenberry sweater, and blue sky are such a contrast to the snowy scenes that we found only a mile or so back on the wooded path.

The colors look even more vibrant in this photo. I think the green branch really brings out the green in the river and pops against the purple of the sweater. 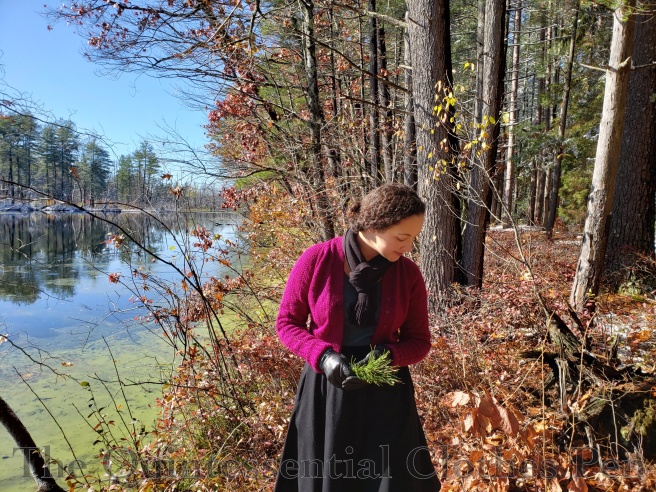 By this point in the walk my down coat was rather too warm, combined with all my other layers. The snow felt the same way, I think, as most of it had melted, leaving bare leaves and trees. 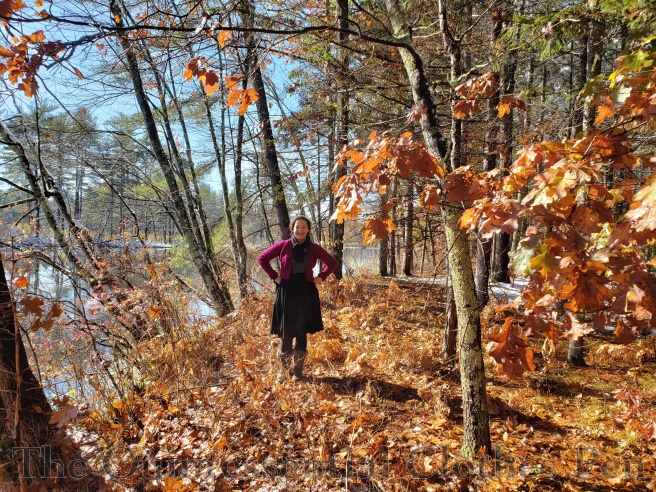 The pine trees in this part of the forest were a different variety. I’m not an expert on tree types, but these remind me more of drooping Douglas Fir trees than the very tall pine trees. 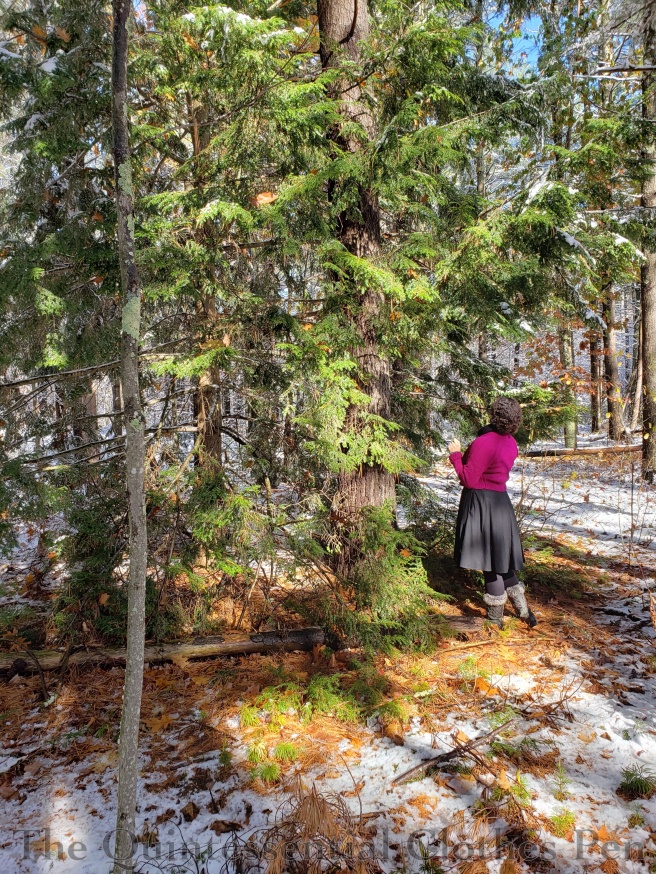 Scattered around were also many baby pine trees, pushing their way up through the snow and leaves to get their share of sunshine! 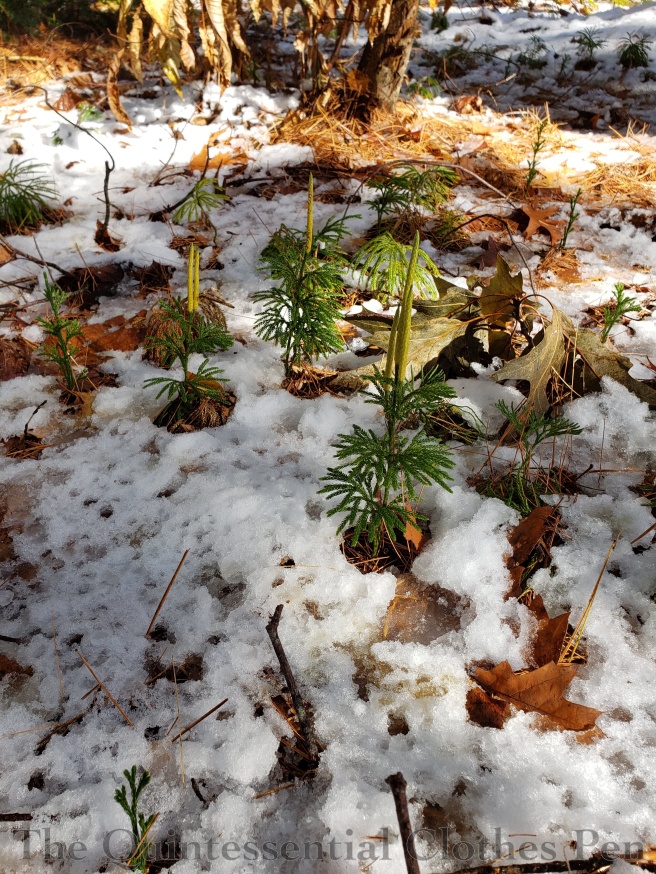 There are always many photos that don’t make the cut, but I found some of the ones from this outing to be particularly amusing, so I thought I’d share a few outtakes, too!

This is probably the most logical one. As the day warmed up the sticky snow was falling off the trees in clumps and landing everywhere… including on my head! Easy to dust off, but amusing!

Next, I have this photo, in which I believe I’m trying to keep a branch from poking me in the head. I actually love the background… this little gully is lovely, with the floating leaves and curved shape leading out to the river. But… my arms remind me of a family joke about ‘keeping the elephants’ away, which is amusing.

Lastly, my favorite outtake. The ‘what??? confusion’ face! This one just makes me laugh.

I hope you enjoyed this beautiful, snowy armchair outing!

9 thoughts on “A Magical Walk Through The Woods”

Closeups of the sleeve pleats at the top (first) and bottom (second) of my most recently competed 1830s dress.
I still had more 1830s sleeve ideas after making 1834 and 1838 sleeves, so I made a different style! These are from 1834-1840 and feature pleats are both the tops and cuffs to control the fullness. There’s a fresh blog post with more details (link in bio).
The most recent thing I’ve made for myself this year was actually a few months ago… but I’m only just getting to sharing it!
The 1834 dress I made last year has a new companion—a matching 1838 bodice! More silly sleeves and a reason to use my new chemisette. Lots of details about the construction are on my blog (link in bio).
It’s a few months old now, but I’m pleased to have completed an 1836 chemisette! It is made from cotton voile and completely hand sewn with French seams, flat felled seams, rolled hems, and whip gathers. More details and photos are included in my most recent blog post (link in bio).
I’m super pleased with this new-ish 1880s corset. It is made of blush colored silk duchess satin and coutil, boned mostly with spiral steel, and flossed with silk thread. It holds its shape without help!