Well, I promised you pictures of my new hair crescent in place… and I did wear it with Belle, my dark blue ball gown, to Fezziwig’s Ball recently… but I was so caught up in the fun of the evening I forgot to stop and have someone take a still picture of the crescent! (I’m sure I will wear it again, though, so hopefully I’ll remember at that time.) This post about last year’s Fezziwig’s Ball gives you background on the theme and title of the ball.

Ready to whirl away on a dancing adventure? Look on! 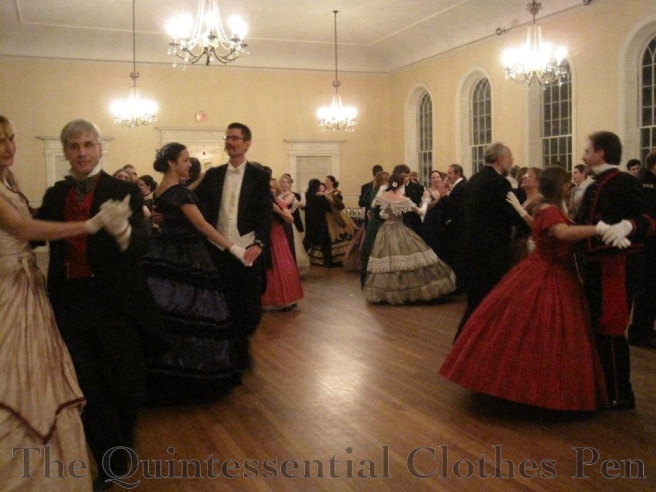 As a final note, let me just say that the evening was wonderful. My favorite moment: the Grand March proceeding up and down stairs, twice! The room was so full that the leaders ran out of options and marched down the stairs!

My first large sewing project for myself was, fittingly, an 1860s gown nick-named “Belle.” (This is the full story of Belle.) Owning a gown like this was a childhood fantasy for me, ever since my first days of loving Gone With The Wind. I finished construction of this gown about four years ago and since then I’ve lovingly stored it and its accompanying undergarments and hoops in my closet, alongside all my modern clothes.

I’ve been hoping for an opportunity to wear Belle for the last four years, not only to give a purpose to the dress I so lovingly created, but also to see how it feels to wear it for a hours at a time.

I just recently attended an event called Fezziwig’s Ball, which was presented by the Commonwealth Vintage Dancers in Salem, Massachusetts. I was able to sing Christmas carols, dance, and have a real experience wearing Belle–and I was in the company of others who not only appreciated my hard work, but who had also worked hard to create and wear their own 1860s dresses!

I learned a vast amount of small details about the practicalities (or hindrances) of wearing 1860s clothing. For example, I understand now why vintage dances from this period turn constantly in the same direction: because your hoops gain so much momentum that they can only sustain fast, continuous movement in one direction, not changing directions. That particular sensation was just not as clear when I was practicing dancing in modern pants or knee length skirts. Also, I have  much clearer idea of why women would faint so often. Imagine dancing fast for four minutes in modern clothes, but then imagine doing the same amount of movement while laced into a corset! I felt faint after four minutes of fast dancing, and my corset wasn’t laced nearly as tightly as ladies would have been laced in the 1860s.

I had so much fun learning first hand and am quite sure I have more lessons in store for me in the future! I’m eagerly awaiting the next 1860s themed ball to be presented in March 2011 by the Commonwealth Vintage Dancers, the Returning Heroes Ball, a specifically 1860s Grand Ball.

The neck and sleeve ruffles on my 1884 plaid wool dress were created using the antique fluting iron I tried out last year. More details about using this antique iron are on my blog (link in bio).
A front view of my 1884 wool dress, with a slightly clearer view of the plaid wool which was my first bit of inspiration for the whole ensemble. You can learn all about the dress in my most recent blog post (link in bio).
I completed this 1884 dress last July, when it was far too warm for photos, but this winter’s below freezing days were perfect for wearing wool! I’m very pleased with the fit and silhouette, which I think helps balance out the relatively simple style.
Showing off a 1950s knitted cardigan and wool 3/4 circle skirt in a magical snowy wood!
In addition to the wonderful full skirt of this 1895 ice skating ensemble, my other favorite part is the braid pattern on the back!
I’m making a wish for snow right now, so I can have some outdoor winter adventures, like this one! This photo shoot a few years ago was to document my 1895 ice skating ensemble.