A few months ago, I had the privilege of being present once again at the Commonwealth Vintage Dancers’ annual Returning Heroes Ball. It was a lovely evening full of dancing, admiring the well turned out ladies and gentleman, chatting…and lots of dish washing (that’s what happens behind the scenes at these things–someone has to do all of the dishes.)

Here are two very similar views of the ballroom. I thought I’d include both because you see different dresses in each one and that’s one of the things that I greatly enjoy about attending historical events! 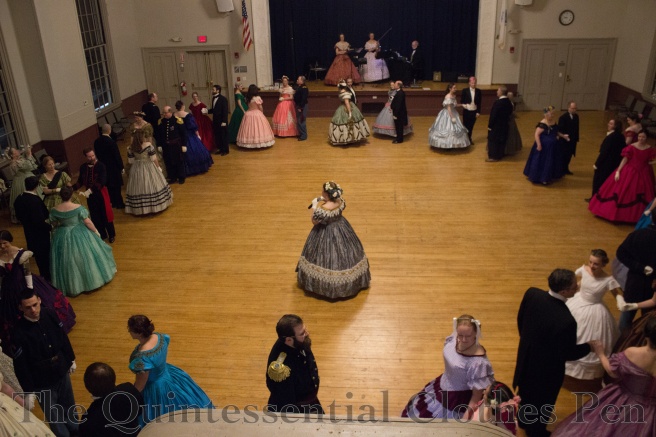 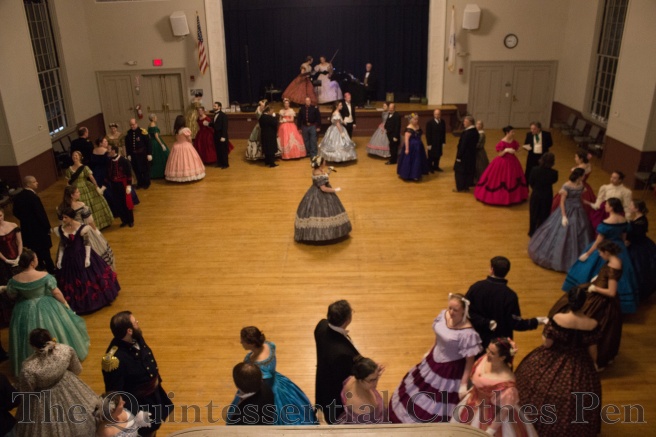 I didn’t spend all my time watching, however. Here I am participating in a quadrille. I wore my most recently constructed mid-19th century dress, Eleanor. I was grateful that the only change I needed to make after the first wearing was shortening the hem one turn so I didn’t step on it while dancing. 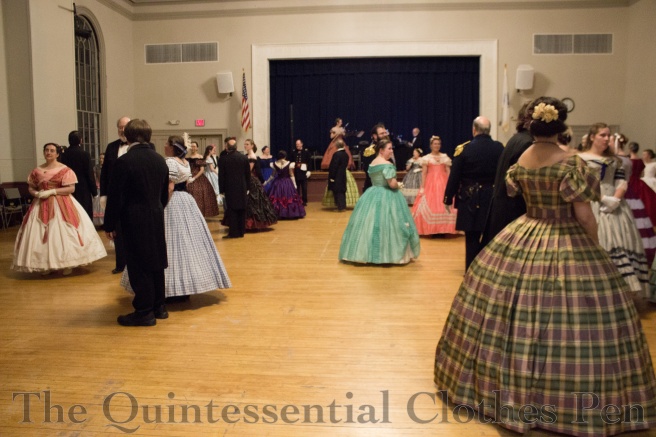 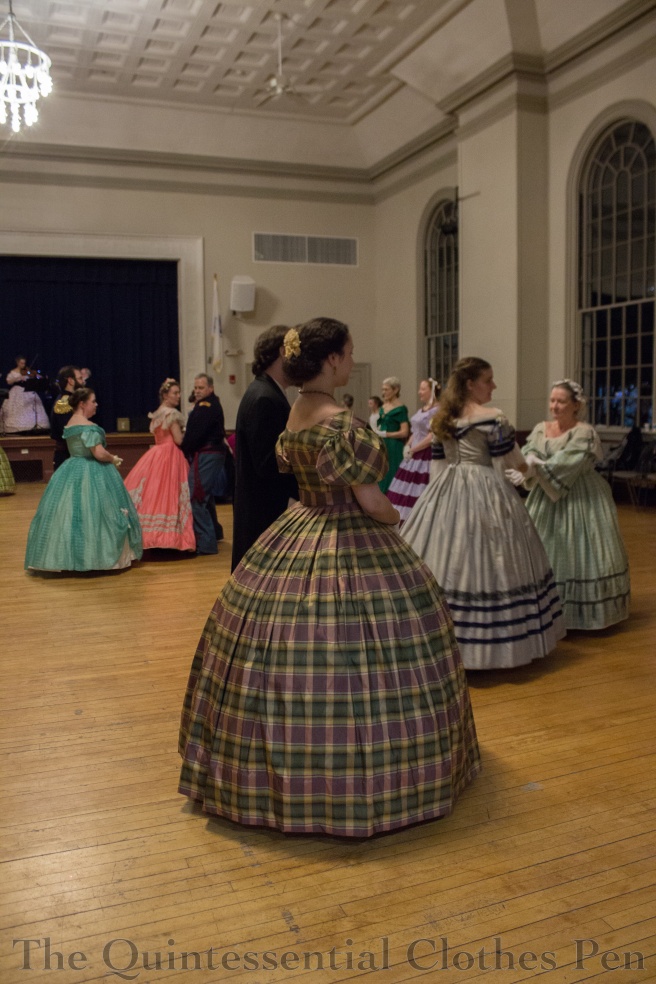 I made my refreshing apron a few years ago, but since then others have joined me in my apron endeavors (they really are quite practical when doing dishes, filling punch bowls, and setting out refreshments!). Aprons in a row! 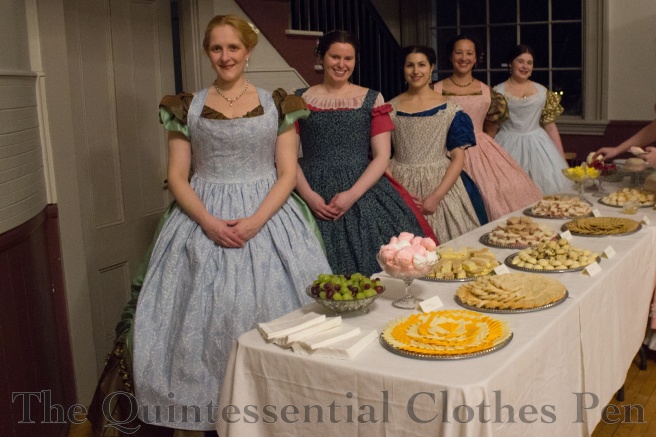 In January, The Commonwealth Vintage Dancers hosted an 1890s weekend (the same weekend that included an ice skating party that I blogged about a few weeks ago). Despite some snow during the day and into the evening, people were not kept away and the ball on Saturday was packed with dancers. Please join me on a little jaunt back to a snowy evening in the 1890s.

Videos are even more immersive than photos, and with this you can actually step into the ballroom that evening. Keep a look out for me partway through the video dancing a polka and then dancing a waltz at the end.

As promised last post, here are a few pictures from the two balls at April’s Regency Intensive Dance Weekend. Hopefully, you remember my descriptions of this weekend as being full of amazing learning opportunities and lovely memories with amiable people. Indeed, both balls left me with a feeling, expressed by Elizabeth Bennet in Pride and Prejudice, of being at a very pleasant house party or private ball, though indeed these events are open to the public.

“It is your turn to say something now, Mr. Darcy. — I talked about the dance, and you ought to make some kind of remark on the size of the room, or the number of couples.”

He smiled, and assured her that whatever she wished him to say should be said.

“Very well. — That reply will do for the present. — Perhaps by and by I may observe that private balls are much pleasanter than public ones. — But now we may be silent.”

From Pride and Prejudice by Jane Austen, in Chapter Eighteen.

Indeed, we were dancing so often at the formal ball that we really didn’t get many pictures of the dancing in action, so you’ll just have to believe me when I express the elegance of the dancing and the ballroom scene.

This is part two of a series of posts about a recent 1860s dance weekend hosted by The Commonwealth Vintage Dancers. The first post, which was about the Saturday of the weekend can be viewed here. This post is about the second day, Sunday. Unfortunately, we didn’t take as many pictures of dancing on Sunday as we did on Saturday. We did, however, continue our tradition of taking lots of pictures of us not dancing, but doing other things. So you’ll just have to humor me during this post filled with a little bit of dancing and a larger proportion of other things.

Before I get started on pictures of dresses and dancing, I’m going to share a few pictures of the building the event was held in, so you can get a sense of the atmosphere. Think cold New England winter… blue sky and a cold breeze… no leaves left on the trees…

Now that you’ve got a sense of the venue, let’s proceed to the ball:

I tried to do something different than my usual 1860s style for this ball, and I must say that I like the results. The more you try out different hair styles, the easier they become! I’d brought my curling iron and I wanted to make use of it for this ball. (I have naturally curly hair, so it’s quite ironic when I use a curling iron. My curls are quite frizzy, a bit wild, and untamed rather than cork screw like, so the curling iron acts as a taming agent.) In the end I had two curls, one hanging on either side of my head. I wouldn’t do this for every ball, but it worked well with the amount of crazy bling I had and with the heavy quality of my dress.

Anyway, in addition to the curls, I did my usual poofy side roll on either side of my center part. I tried to be imaginative in the back but ran out of time. It’s hard to remember now, but I’m pretty sure I braided the back section and made a bun  with the braid. Or perhaps I wrapped my braid around a bun that was made with the ends of the poofy side rolls. Either way, there was a bun and a braid. My Belle hair crescent was mounted over the result. I rather like that it was a little higher on my head than in previous wearings. It was a little more visible from the front.

As you can see, I wore Belle. She was my first historic dress, ever. I wore her more often when I first began vintage dancing a few years ago, but I got a little tired of wearing her and so she’s been living in my closet for over a year. She’s super heavy, which I remembered, but I hadn’t remembered that the weight of the skirt pushed my hoops into an awkward diagonal elliptical shape. I have a bum pad that fixes the problem, but since I’ve been wearing Evie so much and she doesn’t need it I’d forgotten to bring it! Oh well. It was exciting to bring Belle out again, and though I’m not the same size I was about 7 years ago when I made her, she still fits and is still stunning.

Here are some dancing shots from the ball: 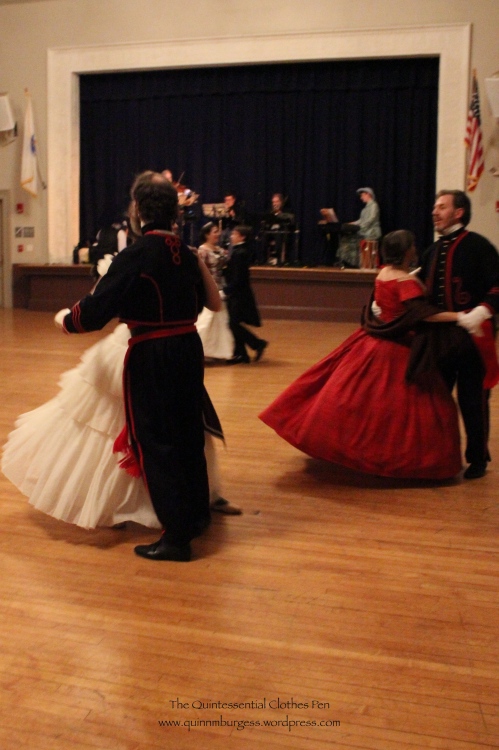 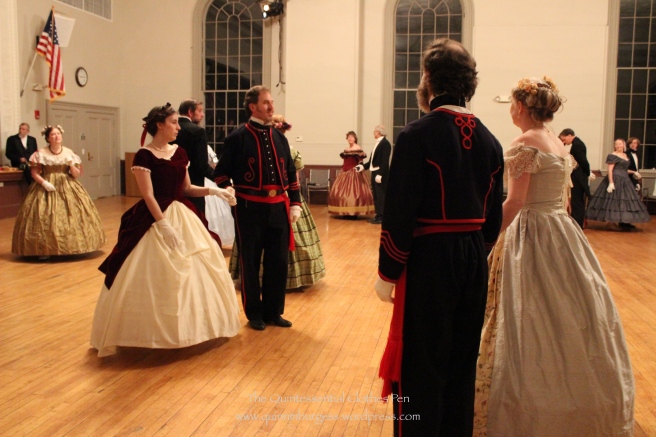 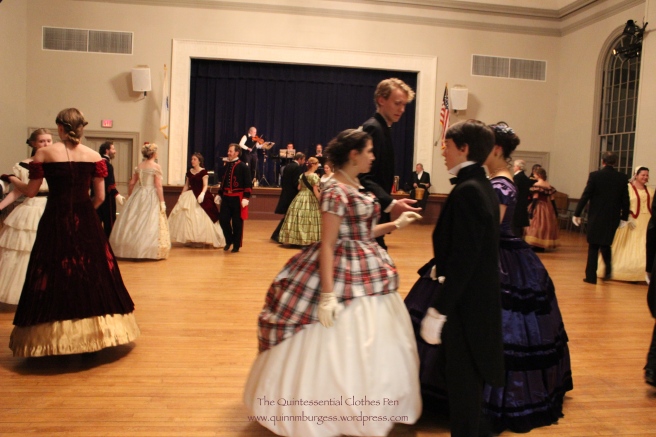 After the ball we took some more not dancing photos. Our prop for the night was a rather short column. And so I present to you a series of column shots: 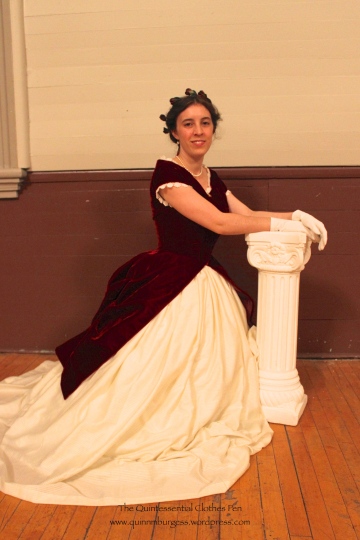 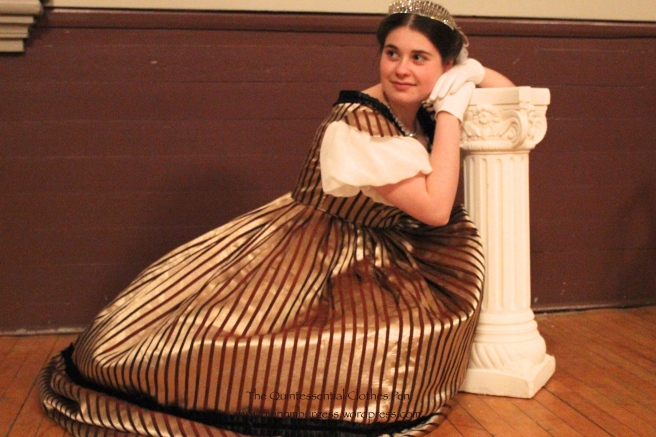 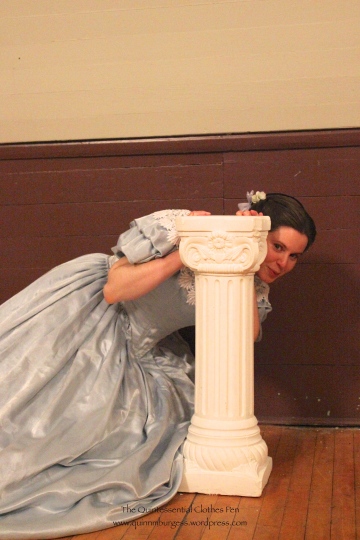 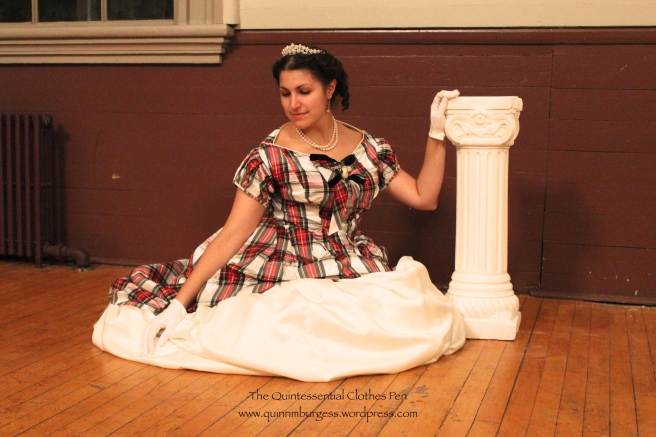 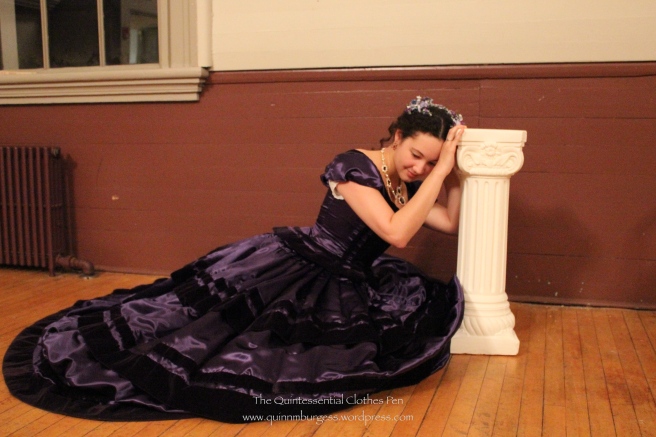 This is my end of the weekend “I’m tired” pose. I love how my tiers fan out and create an elongated effect. It’s quite regal! (The heavy fabric flowing across the floor reminds me of the image below of Sissi–Empress Elisabeth of Austria.)

Well, there you have it. An 1860s dance weekend. I do hope you enjoyed it!

December is going to be a whirlwind of HSF posts and posts about events, so I need to hurry up and get started by sharing pictures of an event that actually happened in November but which I haven’t shared pictures of yet. The event was a 1860s Intensive Dance Weekend, hosted by the Commonwealth Vintage Dancers, featuring two days of dance classes, two evening balls, and a German (an after ball party of fun dance games). I’ve got lots of pictures, so I’m going to split this up into two posts. In today’s post, I’ll share pictures of the Saturday of the dance weekend and Part II will be pictures of the Sunday of the dance weekend.

All in all a fun and energetic day and night of dancing, especially with the German that was directly after the ball. I hope you enjoyed these.

The neck and sleeve ruffles on my 1884 plaid wool dress were created using the antique fluting iron I tried out last year. More details about using this antique iron are on my blog (link in bio).
A front view of my 1884 wool dress, with a slightly clearer view of the plaid wool which was my first bit of inspiration for the whole ensemble. You can learn all about the dress in my most recent blog post (link in bio).
I completed this 1884 dress last July, when it was far too warm for photos, but this winter’s below freezing days were perfect for wearing wool! I’m very pleased with the fit and silhouette, which I think helps balance out the relatively simple style.
Showing off a 1950s knitted cardigan and wool 3/4 circle skirt in a magical snowy wood!
In addition to the wonderful full skirt of this 1895 ice skating ensemble, my other favorite part is the braid pattern on the back!
I’m making a wish for snow right now, so I can have some outdoor winter adventures, like this one! This photo shoot a few years ago was to document my 1895 ice skating ensemble.