When ordering things from the internet sometimes you just don’t know if what you pull out of the shipping envelope will be what you hope for… but I’m pleased to report that my dickey and bowtie shortcut was successful!

The dickey has a neck size that fits me perfectly (I measure 14 ¾” around the neck), is a nice plain cotton material (not polyester-y at all), has a nice collar shape, and has reasonable stitching (some of the reviews said it was horribly stitched, but the one that I received was just fine). The bow tie’s fabric has a nice texture and body, is also not polyester-y (even though it probably is made of polyester), and has solid bow tie hardware.

(For the record, polyester-y means shiny, thin, slippery, or generally wrinkle-your-nose and hard-to-deal with-y. I’m not saying all polyester is bad. Just the bad stuff!)

1: any of various articles of clothing: such as
a: a man’s separate or detachable shirtfront
b: a small fabric insert worn to fill in the neckline

In this case, the dickey I am referring to falls under definition B.

The one thing about the dickey that was ridiculous are the supposedly under the arm elastics that come attached. There is no way they would have sat under my arms and been comfortable! They were only about half the distance from the shoulder they would need to be to even go under my arms! Luckily, a seam ripper easily took them off. Since I’m using this dickey for historical purposes I decided on a more complicated system of vertical tapes and a waist tie to keep my dickey in place under my clothes. Here it is!

The tapes keep the dickey pulled down in the front and back so that I can get dressed without the shirt parts flapping around and looking disheveled.

The only other change I made was to change the angle of the shoulders so they would slope a bit more towards the arm sides. That’s a detail that would be best to customize on each body wearing this garment, so I can’t fault the makers too much–they made a general pattern and it just happens to not have my shoulder angle. No problem! 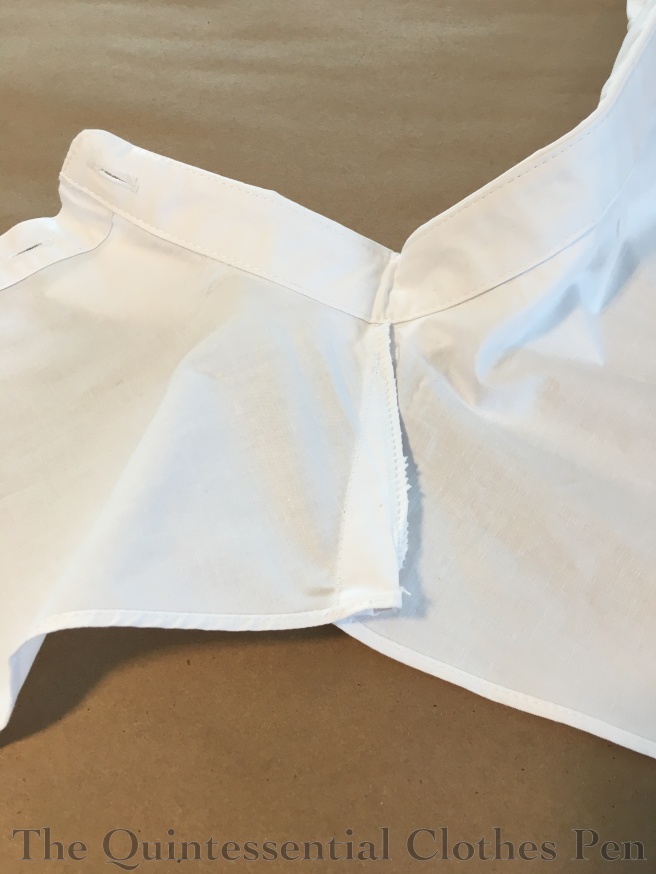 Yay! Now all of the accessories for my 1890s cycling ensemble are assembled and ready to go. Soon there will be photos of the finished ensemble!